UCL minds sequenced the DNA of Britain’s oldest near-complete skeleton, Cheddar Man, and found he was blue-eyed and dark-skinned – sharing the appearance of other Western European hunter-gatherers. 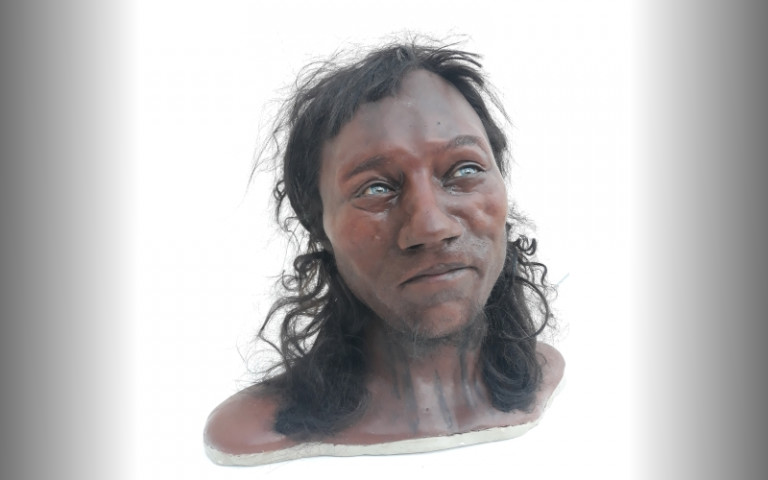 Have you ever done a gene test to investigate your ancestry? You may have assumed that Northern European meant white-skinned but pioneering research from UCL Genetics, Evolution & Environment has shown otherwise.

Cheddar Man is Britain’s oldest near-complete skeleton at ~10,000 years old. In 2018, Professor Mark Thomas and Dr Yoan Diekmann (UCL Genetics, Evolution & Environment) analysed Cheddar Man's DNA sequences to investigate British population prehistory. As a by-product of their research, they were able to establish aspects of his appearance and revealed that he had blue eyes, dark coloured curly hair and dark to black skin.

The work was carried out in collaboration with Natural History Museum Human Evolution and DNA specialists, as well as the world’s leading prehistoric model-makers for the Channel 4 documentary, First Brit: Secrets of the 10,000 Year Old Man. Nothing like this had ever previously done before; Cheddar Man is the oldest British individual to have his genome sequenced.

“Cheddar Man's genetic profile places him with several other Mesolithic-era Europeans from Spain, Hungary and Luxembourg whose DNA has already been analysed. These 'Western Hunter-Gatherer's' migrated into Europe at the end of the last ice age and the group included Cheddar Man's ancestors.

“We found that British Mesolithic hunter-gatherers were closely related to other hunter-gatherers living previously in Western Europe, and shared some aspects of their appearance. Like their Mesolithic continental relatives, they had typically dark skin but light eye pigmentation.

Today, around 10% of indigenous British ancestry can be linked to that population, although most of that ancestry came from Continental 'Western Hunter-Gatherer's', as the British population was largely – if not completely – replaced by incoming farmers around 6,000 years ago.

This first episode in the Made At UCL podcast series features 3 disruptive discoveries stories. Cheddar Man is featured first.