New publication in Current Biology for Baum and Henriques labs

Why try to image live cell divisions in the hyperthermophile Sulfolobus at 75°C? There are several reasons for wanting to do so. First, many cell biological processes previously thought to be unique to eukaryotes are present in a simplified form in TACK archaea (which include the archaeon Sulfolobus) – making this an excellent system in which to study how they work. This includes ESCRT-III and Vps4, which play similar roles in membrane remodelling and cell division in these archaea and in eukaryotes. Second, eukaryotes are known to have arisen from a merger between an archaeal host from the TACK/Asgard family and a bacterial cell that gave rise to the mitochondria. Thus, studying Sulfolobus cell biology promises to give us insights into the origins and evolution of the eukaryotic cell. In a new publication in Current Biology, the Baum and Henriques labs describe the ‘‘Sulfoscope,’’ a microscopy platform that allows live imaging of hyperthermophiles. By imaging cell division in the archaeon Sulfolobus, they observe tight coupling between DNA reorganization and cell division, and complementary roles for two ESCRT-III homologs in ensuring robust and symmetric cytokinesis. 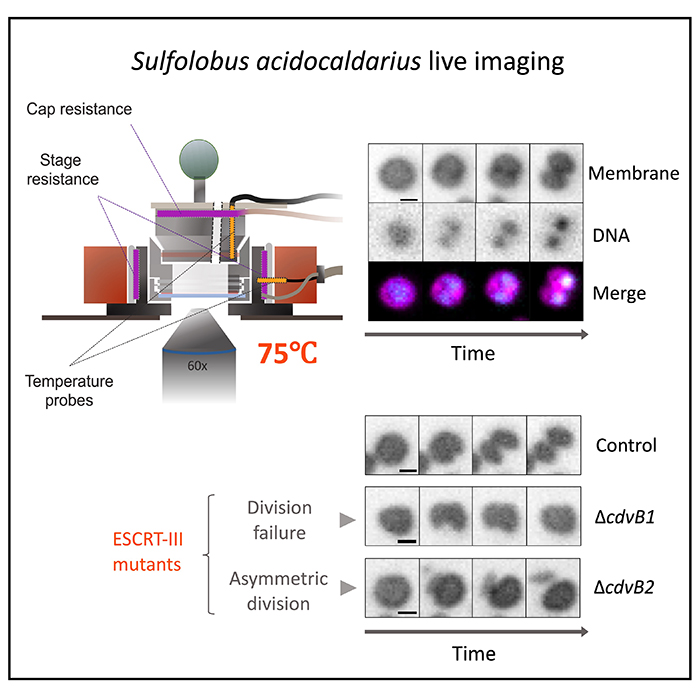