Maria Duda and Natalie Kirkland of the Mao Lab tell us about their recent publication in Developmental Cell, where they revealed a role for Myosin II in preserving the shape of tissues under mechanical stress.

What were you trying to understand? What discoveries have led you to your current work?
Maria: An extensive body of research has focused on the genetic and biochemical control of tissue size and shape, and significantly less attention has been paid to the role of mechanics. However, when you think about it, any deformation or shape change is ultimately a result of force acting on a mass. With this in mind, our overall holistic aim was to broadly understand the mechanical aspect of tissue growth and form.
Natalie: Previous observations have suggested Myosin II is responsive to mechanical stimuli. For example, in dynamic tissues undergoing morphogenesis, Myosin II enriches at cell junctions that are aligned to the axis of tension present in the tissue, and the individual cell junctions are also under a high degree of tension. Furthermore, during her postdoctoral work, Yanlan and others observed enrichments of Myosin II in regions of the Drosophila wing imaginal disc epithelium that were measured to be under high levels of tension. Thus, this begged the question whether Myosin II accumulates in response to tension or is responsible for the local tension, and what is the physiological role?
Maria: We were in a good starting position with an array of genetic and mechanical tools that have been developed in Mao lab to assess the role for Myosin II in the response to mechanical stress. Using bespoke stretching/compression device we were able to screen fluorescently tagged fly reporters and we similarly observed that Myosin II relocalises with mechanical stretch to produce a striking, polarised pattern. The rest followed from this key finding - we did an array of functional assays showing how this polarisation is critical for buffering mechanical force across the tissue and maintaining tissue integrity, as well as uncovering the underlying biochemical mechanism.

Why is your research important? What is your key finding?
Maria: Each single organ in our body is continuously subjected to mechanical fluctuations that originate from internal tissue forces and also external tissue environment (e.g. think of blood pressure in cardiovascular system or mechanical forces associated with lung inflation). In our research we show how epithelial tissues can rapidly refine their mechanical properties as an adaptive and protective response to fluctuations in physical forces. This response is critical to buffer mechanical stresses, to ensure a balance of intrinsic tissue forces and to ultimately preserve tissue shape and integrity. We think that our key finding of stretch-induced assembly of linear, multicellular actomyosin cables, could be a fundamental mechanism that plays a broad role in force adaptation in both development and pathological situations such as cancer and tissue repair, where tissue mechanics are affected in an uncontrolled manner.
Natalie: I also was fascinated that we were able to relate some of our findings in tissues, to work carried out in cell-free systems. We found that Myosin II is polarised due to the reorganisation of the underlying actin cytoskeleton upon stretch. Previous work using isolated actin filaments and Myosin II has demonstrated how mechanical force applied to individual actin filaments can alter the binding of Myosin II, as well as polymerisation. Importantly, their work has also shown that Myosin II preferentially binds straight actin filaments. In our system, we find that stretch-induced activation of the formin, Diaphanous, generates a polarised enrichment of straight actin filaments that increases the stability of Myosin II specifically on the stretched cell junctions.

Can you tell us more about your bespoke stretching/compression device?
Maria: Thus far most of the conclusions about the direct role of forces on cell behaviours have come from the in vitro analysis of individual cells and cell lines, and from genetic perturbations and/or cell ablations carried out in developing animals. This is because of the inherent difficulties of applying forces to animal tissue in a well-controlled manner. As such it has been difficult to dissect the direct role of mechanical forces on complex tissue behaviour. To address this problem, we have designed a novel compression/stretching device that allows us to deform tissues isolated from the fly. Moreover, we can do so using precisely controlled physiological forces, whilst imaging the molecular and cellular events that accompany the deformation at a high temporal and spatial resolution. This bespoke device has been a key to majority of the findings and assays described in this work and its use can potentially be extended to other tissues and model organisms.

What model system did you use?
Maria: We used the Drosophila wing disc as main model tissue as it combines in vivo readouts, complex yet reproducible morphology changes and genetic tractability. Drosophila offers variety of very elegant genetic tools and manipulation techniques that enable mechanistic tissue interrogation that is currently not as feasible with mammalian tissues. On top of that, remarkably 75% genes that cause disease in humans are also found in a fruit fly so it’s actually a great model for translational studies.
Natalie: The wing disc is the larval precursor to the adult fly wing. It is an epithelial tissue that resembles the epithelia lining our intestine, as well as many of our developing organs, which are equally subject to mechanical fluctuations. The wing disc is just big enough to see by eye, and is extremely robust to culturing outside of the organism, making it ideal for mechanical manipulation.

What’s next?
Maria: I think one of most exciting new directions stemming from this work is translation to disease models associated with perturbed tissue mechanics e.g. cancer or wound healing. We have ongoing projects in the lab that cover some of these topics so it will be interesting to see how this research can help not only understand the mechanistics of disease but also aid in identification of new therapeutic targets.
The other aspect of this work are the novel biophysical tools that should be applicable to broader community of scientists and hopefully will aid new, innovative research at UCL and beyond. 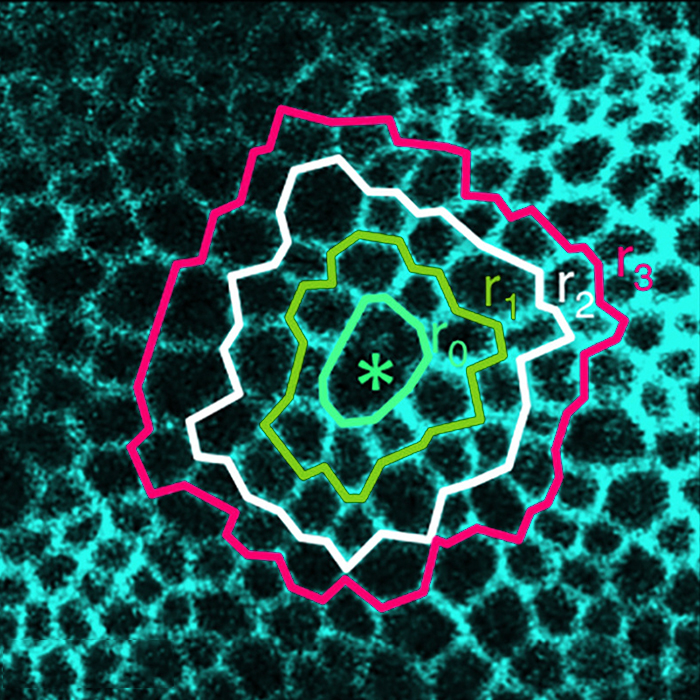