Garrett Hellenthal is an Associate Professor at the UCL Genetics Institute (UGI) in the Department of Genetics, Evolution and Environment. His group develops and applies statistical models to genetic data, primarily to learn about the ancestral and evolutionary history of humans. 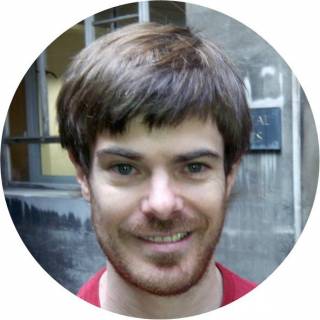 I did my undergraduate degree in Mathematics at Santa Clara University in California. Afterwards I got a PhD in Statistics at University of Washington, focussing on statistical genetics and specifically studying recombination, the process by which the genomes of our mother and father are mixed together to construct the DNA we pass to our children. I then came to the UK to work as a post-doctoral research assistant (PDRA) in the Statistics department at University of Oxford, followed by another PDRA at the Wellcome Trust Centre for Human Genetics (Oxford) to study genetic variants influencing risk of developing multiple sclerosis. I have been at UCL since 2012, initially as a Sir Henry Dale Fellow funded by the Wellcome Trust and Royal Society, and currently as an Associate Professor.

What area of your work most excites you and why?

Scientifically, it’s the power of statistical models to extract information from genetic data. As examples, we can use genetic data to determine where and when different human groups intermixed, allowing us to reconstruct interactions occurring hundreds to thousands of years ago from DNA alone, and how humans’ genomes have enabled them to adapt to specific environments (e.g. pathogens). On a day-to-day basis, it’s coding, probably in large part because I can listen to music while I do it, which is harder to do in seminars and meetings.

What is unique about the UCL MRes in Biosciences that you teach on?

For the courses, the lecturers are fantastic, world-leaders in their areas, and the students get to hear about the very latest cutting edge science done in their fields. Each student also does their own research project, where they embed themselves in their supervisor's lab group and work on an original piece of science analysing real data.

What do you enjoy most about teaching and lecturing your students?

Getting questions from the students, particularly those not about exams and grades. Since what I teach is related to the research I work on, people showing a degree of interest – and also understanding – is very rewarding. Our tutorial where we go over results from genetic ancestry testing is particularly fun, since many students can relate directly to this as they have done tests of their own. I'm positive it leaves them giddy for weeks, if not years.

What’s your next big challenge in terms of your research?

I am currently working on identifying genetic regions that helped humans to adapt to environmental pressures. Over long time scales, this involves looking at changes over time and space in the frequency of (perhaps beneficial) genetic variants. Over much shorter time scales, this includes looking into epigenetic (in particular methylation) modifications whereby certain genes may be turned on or off in the early embryo to respond to environmental cues. To do so, the idea is to jointly analyse loads of available genetic and epigenetic data from hundreds of thousands of people, which involves coming up with scalable new statistical models. In general, we really need more statistics, the cool cousin of mathematics, to make better use of the massive amount of available data we're being happily inundated with.

What motivates you at the start of each day?

The opportunity to analyse a new data set or understand a new aspect of biology or history. For example, my students are constantly teaching me the histories of populations whose genetic data we are studying, e.g. whether empires existed during the specific time periods and in the specific regions where we infer genetic intermixing among populations. Travel is also one of the major perks of this job. I've taken recent trips to Cameroon and Ethiopia with my students, talking to researchers about genetic signatures of past migration events that we infer in people sampled from those countries, how to interpret these genetic signals in light of other anthropological, archaeological and historical information, and how best to convey these findings.

Don't assume someone's confidence in being right is at all related to whether they actually are right. Also, remain calm if your future self visits you to give advice. Don't Looper me.