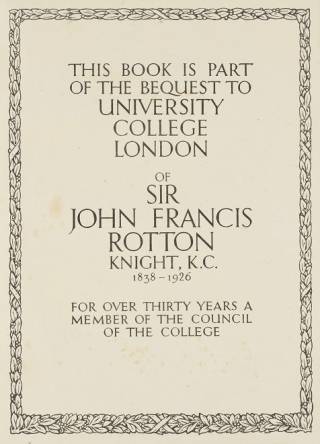 The religious sections include works on church history, debates about the church and the state, the Church of Scotland, dissenters, theology, Christian ethics, the lives of the saints - particularly St. Francis of Assisi - and Jewish emancipation. English literature and literary criticism feature works by and about Chaucer, Samuel Johnson, Oliver Goldsmith, Shakespeare and Pope, as well as works on English language and grammar. French, Spanish and Italian authors are present, as are books on language and dialect. There are works on philosophy, language and literature of the classical world, including the first publication in 1592 in the original Greek of Homer's works. Works on travels and voyages include a description of visits to Italian towns (together with their histories) and to India, a voyage to Patagonia, three years' wanderings in the northern provinces of China, and a narrative by Sir Joseph Banks of Captain Cook's first voyage.

Bequeathed to UCL by Sir John Francis Rotton (1838-1926), who for over thirty years was a member of the Council of the College. The 16th century editions have been incorporated into the Strong Room Collections.

The collection is fully catalogued. To browse the records, conduct a shelfmark search for ROTTON on Explore.