Laurence Housman (1865-1959), brother of poet and scholar A. E. Housman, was an extremely versatile artist, writer and social reformer whose output covered all kinds of literature, from socialist and pacifist pamphlets to children's stories. The collection contains books of verse, poems in anthologies, magazines and journals, including 'Armageddon - and after' in The paths of glory: a collection of poems written during the War 1914-1919 (1919); poems in fifteen issues of Pall Mall Magazine from 1901-1912; numerous first editions, including the 1902 publication of Bethlehem, together with Joseph Moorat's music scores for the play; Prunella, or, Love in a Dutch garden (1906); Victoria Regina (1934) and Little plays of St. Francis (1922), each of which has a scene design by Housman.

Prose fiction first editions include An Englishwoman's love-letters (1900); What next? Provocative tales of faith and morals (1938); The kind and the foolish: short tales of myth, magic and miracle (1952), and A doorway in fairyland (1922). His children's poems and stories were also published in a wide range of children's magazines, journals and annuals. Non-fiction works in the collection which reflect his Suffragette sympathies include an introductory poem by Housman, 'O ye that seek through blood and tears' in Great Suffragists - and why: modern makers of history (1909) and The bawling brotherhood (1910?) published by the Women's Press. Elsewhere, Housman wrote articles on religion, justice, social subjects, literature and art, many of which can be found in the collection.

The Housman collection is part of the library of Ian Kenyur-Hodgkins (d. 1995), antiquarian bookseller, which was purchased by the College in 1978.

The collection is fully catalogued. To browse the records, conduct a shelfmark search for LAURENCE HOUSMAN COLLECTION on Explore. 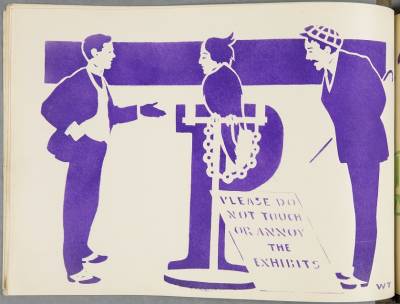