The International Society for Franciscan Studies was founded in 1902 by Paul Sabatier (1858-1928), and a British Branch with Sabatier as its President was established in the same year, with a library from the outset. In 1907 this branch was reorganised as the British Society of Franciscan Studies, which was primarily a society for publishing texts and studies on Franciscan history. It also became associated with productions of the Little plays of St. Francis by Laurence Housman at University College, the proceeds from which supported the Society.

In addition to the Society's publications, the collection includes general works on St. Francis of Assisi and the history of the Franciscan order. The majority of the volumes dates to the early 20th century, but there is some older material as well, with the earliest items dating to the 17th century. 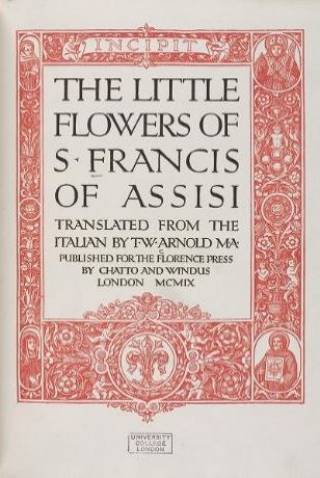 The collection was deposited at UCL in 1938, when the Society disbanded.

The collection is fully catalogued. To browse the records, conduct a shelfmark search for FRANSISCAN SOCIETY on Explore.

Image: The little flowers of S. Francis of Assisi, translated from the Italian by T.W. Arnold (FRANCISCAN SOCIETY ARN 1909)