The library of Raymond Wilson Chambers (1874-1942), who was successively UCL Librarian and Professor of English. The collection includes ca. 30 early printed books on British history and theology dating from the 15th-17th centuries, including several editions of works by Sir Thomas More. The remainder is comprised of Chambers’ working library and dates to the late 19th and early 20th centuries. The main focus is on English language and literature, with some Scandinavian and other languages. It also includes 233 19th-century tracts on medieval English, French and German language and literature, which were collected by the German philologist Eugen Kölbing (1846-1899). Many books are annotated by Chambers, and the collection also includes proof copies of Chambers' own works. 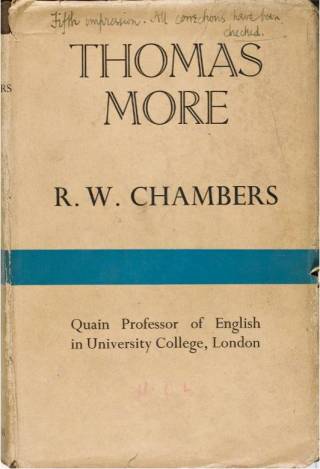 Chambers presented around half of the collection, including the Kölbing tracts, to the College during his lifetime. Ca. 600 volumes were donated to UCL by his sister Gertrude Chambers in 1943 after his death.

The collection is partly catalogued. To browse the records, conduct an author/creator search for “R. W. Chambers” (enclosed in double quotation marks) on Explore.