The Tributes to Sir Moses Montefiore

A collection of some 350 tributes to Moses Montefiore presently on loan to UCL Special Collections from the Montefiore Endowment. They address his love of Zion and commitment to religious observance.

Moses Montefiore (1784-1885) was among the most famous Jews of the 19th century. He served as president of the British Board of Deputies (1835-1874). Queen Victoria appointed him Sheriff of the City of London and bestowed a knighthood on him in 1837, followed later by a baronetcy. He impressed Jews and non-Jews alike by combining a high standing in society with strict religious observance and a lifelong commitment to the Holy Land. On numerous occasions, he intervened on behalf of coreligionists.

Together with the French Jewish leader Adolphe Crémieux (1796-1880) Montefiore obtained the release of Jews in Damascus accused of ritual murder in 1840 through a visit to the Ottoman Governor of Egypt. This and other achievements captured the imagination of Jews everywhere and large numbers of tributes were sent to him from around the whole world, the largest number reaching him on his 100th birthday in 1884.

Documented here is a collection of some three hundred and fifty such tributes, owned by the Montefiore Endowment in London and presently on loan to UCL Special Collections. They address his love of Zion, his commitment to religious observance and to the progress of humankind. His wife Judith Lady Montefiore (d. 1862) is often mentioned.

The collection contains beautifully calligraphed and decorated items and is a truly unique mirror of the multi-faceted Jewish civilization in the 19th century. Mostly written in Hebrew, English, Italian and German, the tributes testify to the admiration of many contemporaries for Sir Moses. The items feature thousands of signatures of ordinary members of now defunct Jewish communities, congregations, associations and institutions, but also of religious and political leaders, and thus are an invaluable resource for researchers.

This online exhibition contains transcriptions of all items in their original languages and scripts, and are fully searchable in Latin and Hebrew script. The documents were transcribed from their original languages and scripts into text files by student volunteers of the Department of Hebrew and Jewish Studies at UCL. The transcriptions are not an academic edition or annotated, but should provide valuable orientation when using the collection.

This project is kindly supported by the Montefiore Endowment. 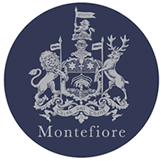