The photograph was taken c. 1867 by Winchester photographer William Savage (1817-87) and is found in an album of his work.

Built on the site of a grange of Hyde Abbey after the dissolution of the monasteries; purchased with the manor of Micheldever in 1546 by Thomas Wriothesley, 1st Earl of Southampton. The last earl of Southampton made Stratton Park one of his chief seats, and his son-in-law, Sir William Russell, pulled down part of the hamlet and added it to his deer park in the 1660s. The Russell heirs sold the estate in 1801 to Sir Francis Baring. Baring remodeled the manor house in a neoclassical style, to designs by George Dance the Younger, 1803–06. The pleasure grounds and landscape park were laid out and planted, starting c.1803 by Humphry Repton. Described by William Cobbett, in Rural Rides. Late C19th , Thomas Baring, 1st Earl of Northbrook, laid out more formally structured gardens, with plantings by Gertrude Jekyll.

Most of the Stratton Park house was demolished in 1963 by owner John Baring, 7th Baron Ashburton (known as "Basher Baring" for his involvement with the demolition of the firm’s banking HQ in London).

Only the stone portico remains with a modernist house (built 1963-65) adjacent. 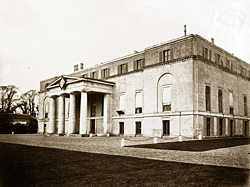