1832: when Edward Southwell, 21st Lord de Clifford, died without issue, the house sold in 1833 to Mr Philip John Miles for £210,000. He had purchased Leigh Court Estate and had the present mansion built there.

P. W. S. Miles financed the building of the railway and the docks at Avonmouth.

1865 his son and heir Philip Napier Miles born. He ‘was a gifted musician and composer and became a generous patron of music’.

To pay death duties the Kings Weston Estate was auctioned for £9,800 and his widow had a house built in the grounds, now Kings Weston School. 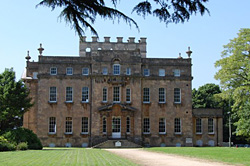