It is with great sadness that we announce the passing of Vincent Ting Kau Cheung on Saturday 31 July, peacefully surrounded by his family. 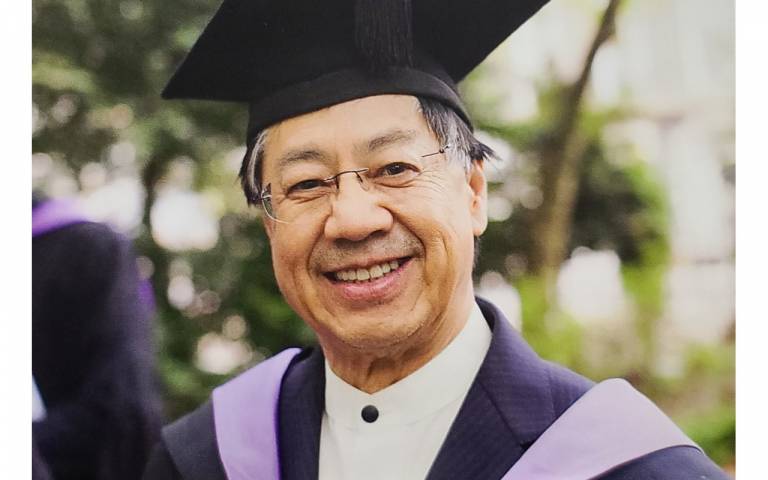 Vincent was the beloved husband of Christine and devoted father to Alex, Nick, Stephanie and Natalie. He was a distinguished UCL Honorary Fellow and alumnus who displayed exceptional loyalty and generosity to UCL and the Faculty of Laws.

Born in Hong Kong to the late Cowan and Mui Hang Fong, Vincent was the eldest of six siblings. From a young age Vincent knew he wanted to study Law, and committed to educating himself, learning English at night school at the age of twelve.

Vincent wanted to study in London and arrived in 1961 by boat. He had heard of UCL through an employee at his father’s company, whose cousin was UCL lecturer Professor Ping Chen. Upon arrival in England Vincent rang the Laws Faculty and asked to meet with the Admissions Tutor, the late Denys Holland.

Denys was renowned for his unorthodox admissions processes in the 50s and 60s. On paper Vincent did not have the admissions requirements to be admitted to UCL, but Denys had a great instinct for recognising talent and personality beyond grades. In 1962 Vincent was offered a place to study for the LLB. He showed a powerful mind, enormous drive, great character and charm. He became one of Denys’s protégés and a firm friend of the Holland family.

Vincent met his wife Christine Howarth (BA 1968) while studying at UCL. He graduated in 1965 from UCL and qualified as a solicitor in 1969. He became a law lecturer at Kingston Polytechnic (now Kingston University) and acted as a legal advisor to students at UCL. He returned to Hong Kong in 1971 where he continued in legal practice.

In 1990 Vincent was one of the founding partners of Vincent T.K. Cheung, Yap & Co. It quickly established a reputation for professionalism, integrity and outstanding legal services and it is one of the leading law firms in Hong Kong today.  Vincent also developed a very successful business career, from which he never retired.

Alongside his successes in law and business, one of Vincent’s passions was wine, ignited during the boat trip from Hong Kong to England via Marseilles when Vincent was just 18 years old. He was the Grand Maître of Asia for the Commanderie de Bordeaux and in 2006 was awarded the Commandeur de l’Ordre du Mérite Agricole for his services to French wine and agriculture.  Those attending many Laws Faculty events over the years will have savoured the outstanding wines that Vincent so generously donated from his collection.

Vincent attributed much of his success to UCL and was a lifelong supporter of UCL Laws. He was instrumental in setting up the Denys Holland Scholarship, with other alumni and close friends, a founding member of the Hong Kong Alumni Club and established the UCL Scholarship Hong Kong Foundation for overseas students who wish to study at UCL. Among many gifts over the years, including sponsoring portrait competitions for former Provosts Sir Malcolm Grant and Professor Michael Arthur, Vincent made possible the creation of a flagship lecture theatre in the Laws Faculty, which he asked to be named in honour of Denys Holland.  The lecture theatre was opened by Her Royal Highness, The Princess Royal, in February 2011.  In 2009 Vincent was awarded an Honorary Fellowship for his lifetime service and philanthropic commitment to UCL.

UCL’s Dean of Faculty of Laws, Professor Piet Eeckhout, who met with Vincent and his family when visiting Hong Kong, said:  "Vincent was such a generous man, as a professional, as a most loyal alumnus and supporter of UCL, and, I have no doubt, also as a father and husband.  Vincent and his wife Christine both hosted me with incredible kindness when I visited Hong Kong. I know how much Vincent has done for UCL and for our Faculty, and we will be forever grateful.  His name and support will continue to resonate between the walls of Bentham House, and far beyond.  We will continue to honour his friendship, kindness and generosity, as best we can. Our thoughts are with his family in this most difficult time."

Professor Dame Hazel Genn, Vice-President External Engagement & Advancement and Former Dean of UCL Laws, worked closely with Vincent over many years and is a friend of the family, said: “I met Vincent in Hong Kong in 2008 on my first trip as Dean of Laws.  I was immediately struck by his devotion to UCL, his kindness, humility, and love of life. Vincent’s lifelong generosity to UCL and the Laws Faculty, in particular, has made a real difference to the lives of staff and students alike. He leaves a tangible legacy and so many wonderful memories. I feel fortunate to have become friends with Vincent and Christine and will forever treasure the time we spent together in Hong Kong and London.  I will never forget Vincent’s slow cooked brisket.  Vincent will be sorely missed by so many people and always remembered with huge fondness. My thoughts are with Christine, the family and  countless friends at this very sad time.”

Victor Chu CBE, UCL’s Chair of Council (LLB 1979), said: "Vincent was a distinguished leader in Hong Kong's legal and investment community. Moreover, he will be greatly missed as Chairman of UCL Hong Kong Alumni Scholarships Foundation, founding member of UCL Hong Kong Alumni Association, and Hon. Fellow of UCL. His charm, generosity and unfailing friendship to so many of us in the UCL community will forever be fondly remembered."

Dr Michael Spence AC, UCL’s President & Provost said: “Vincent was one of our closest, most active and most supportive alumnus.  His death has greatly saddened many people at the university; I had only been able to speak with him once since joining UCL, but his reputation went before him and I had hoped to meet him properly and get to know him when circumstances allowed.  Our thoughts are with Christine and all of Vincent’s family and I send sincere sympathies from UCL.”

Professor Sir Malcolm Grant, former President and Provost at UCL, who got to know Vincent well during his time at UCL, said: “Vincent Cheung was an immensely warm and generous friend of UCL. His generosity was matched only by his personal modesty. He had the warmest memories of his time here as a law student, which is where he met his wife, Christine, and he maintained many personal friendships from that time. He was a leading member not only of our Hong Kong alumnus, but also of our Laws alumnus. We became close friends during my time as Provost and I miss him very much today.”

Andrew Ng (LLB 1985), Chair of Hong Kong Alumni Group and UCL Honorary Fellow, worked closely with Vincent in Hong Kong said: “Vincent was the kindest, most generous kindred spirit and mentor. He worked with me as Governor of UCL Scholarship Hong Kong Foundation and as supporter of UCL Hong Kong Club for many years and supported us from donating wines to our events and auctions, hosting events and the numerous scholarships his foundation has awarded touching so many lives. He was one of our greatest supporters and a close personal friend, alum and mentor. He will be greatly missed.”

Sir Ian Kennedy (LLB 1963), distinguished QC, alumnus and peer, said: “I knew Vince for over 50 years. My sons called him uncle. I taught Alex his oldest son (at King’s!). Our families grew up together albeit separated by distance. Vince was an extraordinary man. Yes, he was an immensely successful lawyer and businessman with all the trappings that went with such success. But, he never, ever changed. He was always the warm, kind, caring, immensely generous Vince whom I first encountered all those years ago. He made friends and he kept those friends as he moved through life. It wasn’t just the spectacular generosity – “You’re having a rough time, Ian. Here are four tickets. Come and stay with us in Hong Kong for a while”. It was also the quiet, determined commitment to UCL and the Law Faculty, long before he was able to translate that commitment into the gifts he later showered on the College. His respect for the man who changed his life, Denys Holland the Sub-Dean of the Law Faculty, later the College’s Dean of Students, drove him to ensure that Denys’ memory lives on, not least through the Denys Holland Scholarship. He saw it as a way of saying “thank you” and we are all blessed as a consequence.

Vince’s death will be a source of huge grief to his family, to his myriad friends and to UCL and his beloved Law Faculty. He will be sorely missed.  But he has left behind a legacy that will long survive him.”

Michael Flesch (LLB 1965), distinguished QC, alumnus and peer, said: “Although we overlapped at UCL I did not get to know Vincent well until a few years later. I was fortunate enough to do work in Hong Kong and the highlight of my visits was always the time spent with Vincent and his lovely family. Vincent was a very special man, a one-off. Interesting, curious, knowledgeable, great fun to be with- and, above all, incredibly generous. I, and many others, can testify to that. Vincent, together with Chris, was always incredibly hospitable both in Hong Kong and in their lovely home in London. Usually Vincent would do the cooking, other guests were invariably interesting and entertaining, and the wines were legendary! Vincent will be very sadly missed by his many, many friends. I am proud and fortunate to have been one of them.”

Nick Holland, Chair of Denys Holland Scholarship Committee, and Godson of Vincent, said: “We are deeply saddened by Vincent’s passing.  Our families have been one from the time that he and Christine first became friends with my parents, Denys and Winnie, in London at UCL in the 1960s.  Vincent’s accomplishments were astonishing but his defining characteristics were his generosity and his modesty.  Vincent and Christine’s generous gifts to UCL were extraordinary:  the Denys Holland Lodge (at Ifor Evans Hall), the Denys Holland Lecture Theatre, their contributions to the Denys Holland scholarship, the incredible wines they provided every year for the Denys Holland Dinner.  Their generous decision to ask that these gifts be named in honour of my father touched our family more than Vincent probably knew but they are also telling of his modest nature.  Vincent was a great friend to my father, to me and to our family.  He was an incredible man whose warmth and kindness shone through.  Vincent will be sorely missed by all who knew him, including all of the Hollands. Our thoughts and prayers are with Christine and with Vincent and Christine’s children and grandchildren.”

Vincent was undoubtedly a remarkable man; humble, kind, full of fun and extraordinarily generous. His enthusiasm and dedication is apparent in everything he did and enjoyed, and his commitment to inclusion and diversity has made a long-lasting impact to UCL Laws. Vincent touched the lives of so many and leaves an enormous legacy. He will be remembered fondly by the UCL community and treasured, with deep gratitude. Our thoughts are with his family and friends during this time.