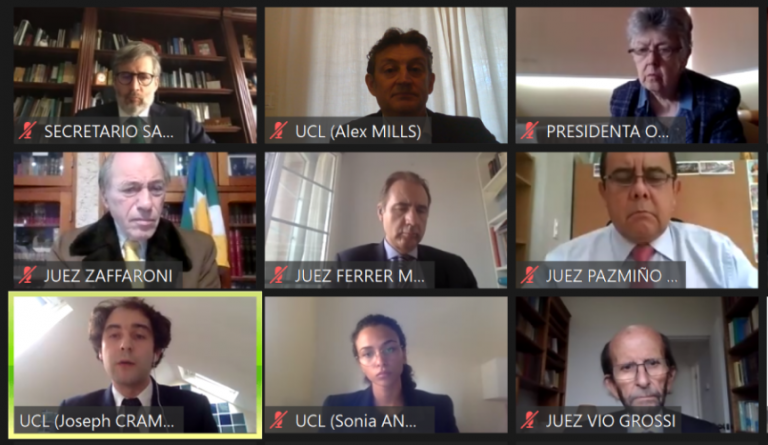 On 15 June 2020, two UCL Laws students (Joseph Crampin, a PhD candidate, and Sonia Anwar-Ahmed Martinez, an LLM student specialising in international law) participated in oral pleadings before the Inter-American Court of Human Rights, as part of a delegation led by Professor Alex Mills, Professor of Public and Private International Law.

The delegation was representing the UCL Public International Law Pro Bono Project, and the invitation to participate in oral pleadings followed from the submission of Written Observations of Law by the Project in December 2019. Those observations were based on research by Sonia and five other UCL Laws LLM student volunteers (Justine Batura, Stephen Karori, Ron Koo, Jack Sadler, and Clara Scharfenstein), working under Joseph’s supervision.

The pleadings, which had been postponed from earlier in the year because of the Covid-19 pandemic, were held by video conference – an innovation by the Court. The subject of the proceedings concerns an advisory opinion request made by the Republic of Colombia, on the legal effects of a denunciation of human rights treaties in the Americas, including in the context of serious and systemic human rights violations. Congratulations to Joseph, Sonia, and all the students who did such fantastic work on the project! A recording of the oral pleadings can be viewed on the Court’s YouTube page.