Early career researchers from across the world came together at the event to discuss their research interests in Environmental Law. The symposium involved academic experts from the UCL Centre for Law and the Environment. 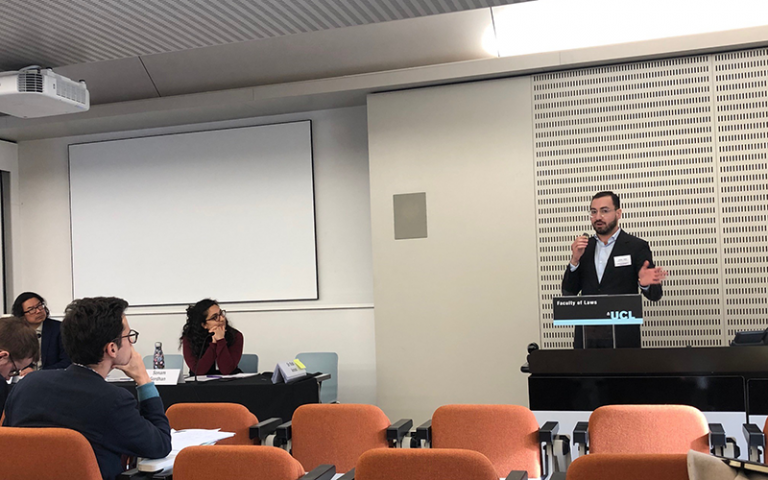 The fifth UCL-KCL Environmental Law Symposium took place at UCL Laws on Friday 21st February 2020. It was co-organised by Sonam Gordhan (PhD Candidate, UCL Laws) and Emily Webster (PhD Candidate, King's College London), with generous support from colleagues at the UCL Centre for Law and the Environment and King’s College London. The event brought together over 20 early career researchers from across the UK, Europe, India and China to discuss their research interests in Environmental Law. Academic experts from the UCL Centre for Law and the Environment, King’s College London, SOAS, Kent University, Nottingham Trent University and the University of York provided insightful and constructive feedback to participants during the eight panels that took place over the course of the day.

The Symposium began with an opening keynote from Professor Maria Lee (Professor of Law at UCL Laws), who set the tone for the day with her discussion of ‘Environmental Law Scholarship and the Revival of Technocracy’. She highlighted the uncertain role of experts in a time of great environmental and democratic challenges with the twin problems of climate change and environmental degradation on the one hand, and the turn to populism on the other. Situating her talk within the concept of public participation, she acknowledged its limitations while also emphasising its importance as a democratic approach to environmental decision-making. These were important words for the researchers in attendance and also for the practitioners, policy experts and non-governmental organisations that attended the conference.

Participants were invited to present their work for 15 minutes each at a diverse range of panels. In the spirit of sustainability, three participants from the Netherlands, Portugal and Hong Kong gave their presentations over Skype. Topics included the legality of tiger farming and trophy hunting, marine genetic resources, green bonds taxonomies, green capitalism, the role of civil associations and the role of courts in climate change disputes. The richness and depth of the topics discussed is reflective of the varied and intradisciplinary nature of environmental law scholarship. The programme for the day is available here. Following a range of stimulating discussions and constructive feedback sessions, all of the attendees came together for closing remarks led by Professor Stuart Bell (Dean of Social Sciences, University of York). His poignant words resonated across the room, as he called for all of us to think deeply about our academic identity, and the principles and values that underpin our research objectives. His closing remarks reminded us of the challenges that we all share, yet left us with optimism about the future as we embark on our careers.

The day marked an important milestone for researchers in environmental law. Participants ranged from those in the early stages of their PhD, to those who were embarking on their postdoctoral research objectives. Emphasis was placed on the supportive nature of the Symposium, which provided students and researchers with an unparalleled opportunity to share their ideas in an encouraging context that built and strengthened links in the environmental law community.

The organisers are particularly grateful for the support they received from the UCL Events team, the panel chairs and the participants. The Symposium was financially supported by UCL Laws, King’s College London Dickson Poon School of Law, the UCL Centre for Law and the Environment, the Transnational Law Institute at King’s College London and the London Arts and Humanities Partnership.