The monograph Contractual Penalties in Australia and the United Kingdom: History, Theory and Practice by Dr Nicholas Tiverios, former UCL Laws PhD student and Teaching Fellow, has been published by Federation Press. 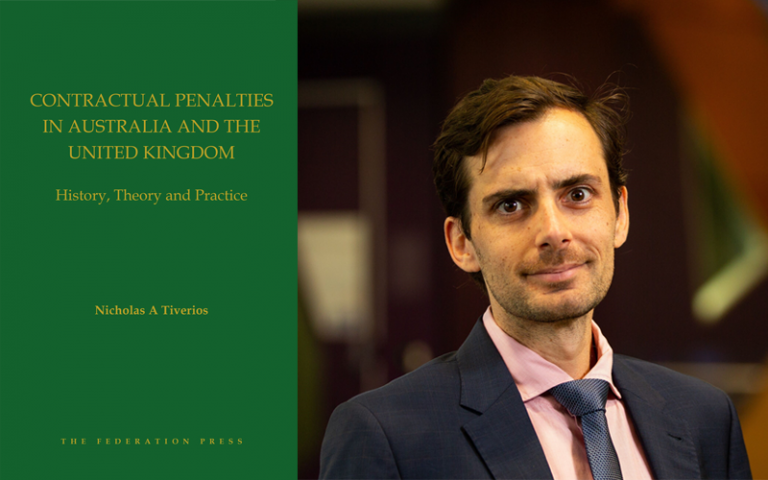 Contractual Penalties in Australia and the United Kingdom: History, Theory and Practice is an expansion of Dr Nicholas Tiverios' doctorate completed at UCL Laws.

It is a longstanding and common drafting technique in Australia and England for contracts to contain an agreed remedy which one party (A) can claim against the other (B) if B fails to fulfil her side of the bargain. This book aims to provide a comprehensive answer to a vital question that affects consumer, commercial and government contracting: when will a court refuse to enforce A’s right to an agreed remedy because it impermissibly punishes B? In doing so, this book seeks to provide readers with:

From the Foreword by the Hon Justice James Edelman, High Court of Australia

“The detailed doctrinal and philosophical analysis in Contractual Penalties in Australia and the United Kingdom makes it a book for scholars who want to understand the historical, conceptual, and moral foundations of the prohibition against contractual penalties. But its clear and concise style and its chapters and sections concerning the practical application of a doctrine based upon slippery foundations also make it essential reading for all commercial lawyers in Australia and England.”

Nicholas Tiverios is a Lecturer at the UNSW Faculty of Law. Prior to joining the faculty at UNSW, Nicholas was a Teaching Fellow at UCL Laws where he completed his doctorate as the inaugural Peter Birks Memorial Scholar (between 2015-2018) supervised by Professor Ben McFarlane and Professor Charles Mitchell. This book is an expansion of his doctorate completed at UCL. Nicholas also holds a Master of Laws (Dist) from UCL (2014-5, where he was ranked first in his year and studied on the Sir John Salmond Scholarship) and a Bachelor of Laws (Hons I) from the University of Western Australia. He previously worked as the High Court of Australia’s Legal Research Officer and practised as a solicitor in Melbourne. He publishes and teaches in the areas of contract law, equity, remedies, unjust enrichment, legal history and jurisprudence.

Speaking of his time at UCL Laws, Nicholas said:

“I am incredibly grateful for my time at University College London which made this book possible. This book is an expansion of my doctorate monograph which was completed at UCL as the inaugural Peter Birks Memorial Scholar. I would like sincerely to thank my two supervisors, Professor Ben McFarlane and Professor Charles Mitchell, for the generous time and assistance they afforded me in the completion of my thesis. I could not have asked for two better supervisors and for a more stimulating three years as a doctorate student. I would also like to thank the UCL Faculty of Laws and the anonymous donor responsible for the Peter Birks Memorial Scholarship. I am incredibly grateful to have received the inaugural Peter Birks Memorial Scholarship in order to help me complete my postgraduate studies. My project would simply have not been viable without the generous support afforded. I would also like to thank Dr Niamh Connolly (UCL) for overseeing my upgrade from MPhil to full PhD status and the support staff in the UCL Graduate Studies office who have made my life easier. The book also benefited greatly from the feedback from my two doctorate examiners, Professor Edwin Peel (University of Oxford) and Professor Paul Mitchell (UCL), both of whom provided thought provoking feedback as my interlocutors during my viva."

Further details of the book can be found on the Federation Press website.