Sexual Harassment, NDAs and the role of Lawyers: Karon Monaghan in conversation with Zelda Perkins

The event was organised by UCL Centre for Ethics & Law as part of the 100 Years of Women in Law celebrations. 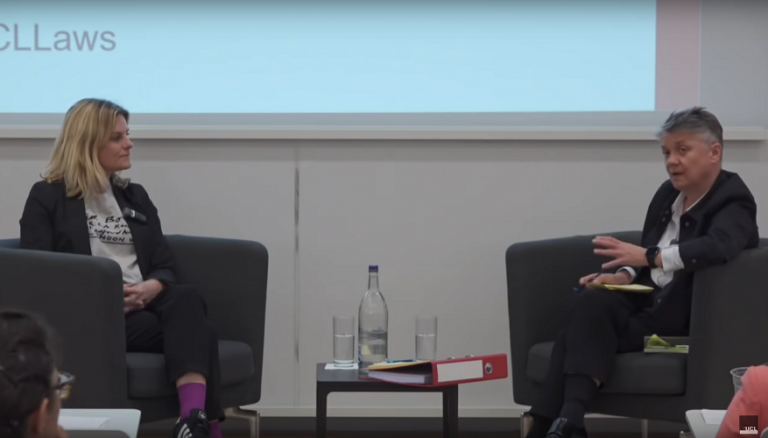 On Wednesday 13th March, UCL Laws hosted ‘Sexual Harassment, NDAs and the role of Lawyers’, where Karon Monaghan QC (Barrister, Matrix Chambers) was joined by Zelda Perkins (Theatre Producer, Robert Fox Ltd) for a conversation about the use of NDAs in sexual harassment cases.

The conversation began with Zelda discussing her experiences of working with Harvey Weinstein, and of sexual harassment in the workplace.

It then moved onto how law firms and lawyers are complicit in covering up cases of harassment and discrimination through drafting NDAs which are sometimes essentially unenforceable. Zelda recounted how upon seeking legal advice, her lawyers presented settlement and entering into an agreement as the only realistic option for Zelda and her colleague; instead of going to court. Karon and Zelda also discussed the ethics of using and negotiating NDAs –it being suggested law firms have considerable skin in the game when it comes to NDAs. They make money out of these agreements and some may have assisted in covering up criminal behaviour. As such, there was a strong case for saying NDAs should not be used in cases of harassment, prejudice, or discrimination.

Both called for organisations such as the SRA to provide clearer guidance to solicitors on negotiating NDAs which cover crimes, instead of protecting the alleged perpetrators they are representing.

As their closing remarks, Karon and Zelda emphasised the need to increase access to justice and mediation. Further, they stated that the law should not be used as a weapon - it must be scrutinised to prevent further crimes, and not silence victims.

"I am not laying the responsibility solely at the feet of solicitors, this is about better regulation, better legislation, better corporate governance and most importantly for all of us to engage in changing the cultural environment . But first let's make sure that the law cannot be used as a tool of the powerful to abuse the weak."

"It is absolutely vital that the ongoing debate about NDAs gives voice to those with experience of making complaints of harassment and discrimination. Some clearly feel that the law is weaponised. Victimised by their organisations, they often feel traumatised further by the way law is used to exclude and then silence them. We were delighted to host Zelda and Karon. Zelda’s willingness to speak up was a brave and necessary step in raising workplace misconduct in everyone’s consciousness. Karon is a brilliant barrister brave enough too to admit her mind might be changing. We can argue about the rights and wrongs of NDAs but we need to have a clear eye on how those legal devise are experienced by real people if we are to think clearly about those rights and wrongs."

A livestream of the event will be made available on the UCL Laws website shortly – please check our Twitter page for updates.