‘Female Firsts’ by artist Kristina Clackson Bonnington celebrates women who made significant advancements in their fields and paved the way for other women. 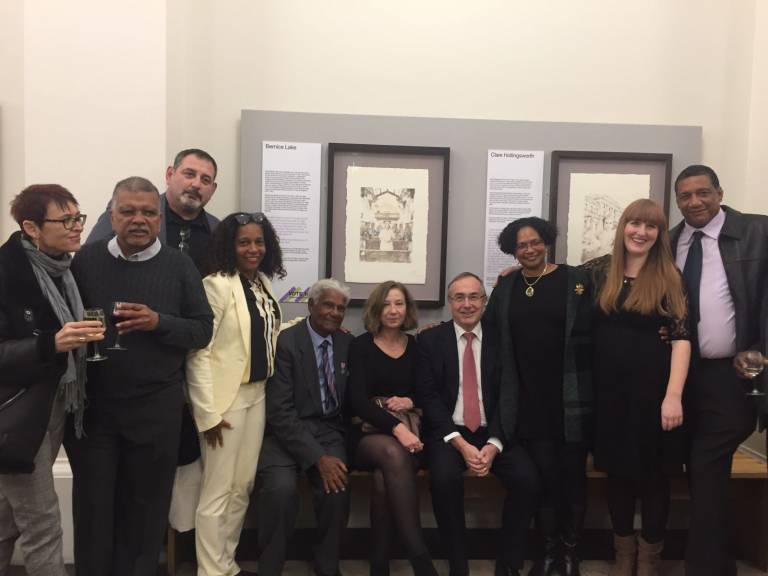 Britain's first female doctor, the first female winner of the Turner Prize and the first black woman to play for England Women's cricket team were among 12 exceptional women that have been honoured in individual portraits, as part of UCL’s Female Firsts art project.

The 12 women were chosen from a selection of inspiring women nominated by Faculties from across UCL by a judging panel of staff, students and alumni.

Dame Bernice Lake QC, nominated by UCL Laws, was the first woman from the Eastern Caribbean to be appointed Queen's Counsel in 1985. The jurist and legal scholar had a career spanning over 40 years, and was part of the team which drafted the Antigua and Barbuda constitution in 1981.

Antigua and Barbuda bestowed a knighthood on Dame Bernice in 2004, for her contribution to the legal field, her stance on women's issues, civil and political rights and personal integrity.

Dame Bernice’s family were in attendance to see the unveiling of the portrait at the exhibition’s opening last month – which coincided with the centenary of women’s first vote in a UK general election.

Professor Alison Diduck, Professor of Law at UCL Laws, was on the nominating panel and commented:

"2019 marks the centenary of the repeal of the Sex Disqualification (Removal) Act 1919, which, among things, removed restrictions upon women becoming members of the legal profession. It is an appropriate time to celebrate the life and career of Dame Bernice Lake QC, whose extraordinary contribution to constitutionalism in her region and to the protection of human rights and women’s rights marks her as an outstanding example, not only of a UCL ‘Female First’, but of a woman committed to the ongoing struggle for equality for all."

Female Firsts is open until 1st February 2019 at South Cloisters, UCL, and is free to attend.