Baroness Hale of Richmond, President of the Supreme Court, has been appointed as a Honorary Professor at UCL Faculty of Laws, it has been announced today. 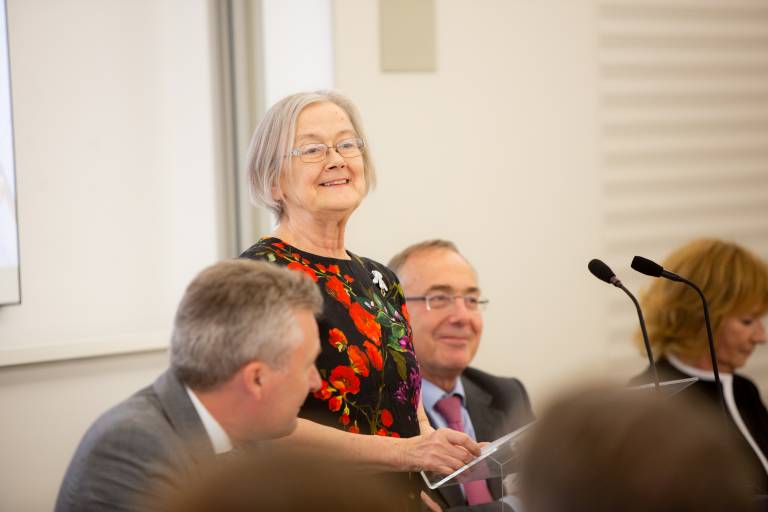 UCL Laws’ Judicial Institute is the first and only centre of excellence devoted to research, teaching and policy development to promote understanding of the judiciary and a fair and effective judicial system. Lady Hale has been on UCL’s Judicial Institute Advisory Board, since it was established in 2010.

As a honorary professor at UCL, Lady Hale will play a part in research, teaching, and public engagement in the Faculty of Laws, particularly in her areas of interest such as women’s rights, access to justice, and the rule of law.

Lady Hale has achieved a number of firsts in her career; she was the first woman appointed to the Law Commission, the UK’s first female Law Lord and the first female Justice of the Supreme Court.

She graduated from the University of Cambridge in 1966, before teaching law at the University of Manchester from 1966 to 1984. She also qualified as a barrister and practised for a while at the Manchester Bar. Specialising in family and social welfare law, she was founding editor of the Journal of Social Welfare and Family Law and authored a pioneering case book on ‘The Family, Law and Society’.

In 1994, Lady Hale became the first High Court judge to have made her career as an academic and public servant, rather than a practising barrister.

Lady Hale has a long-standing relationship with UCL Laws. Over the years, she has supported a number of key initiatives and been a regular speaker in the Law Faculty’s Moot Court. In June 2018, Lady Hale officially re-opened Bentham House, a Grade II listed building and home of UCL Laws, which was beautifully restored and modernised to provide new teaching and learning space on par with its world-leading teaching and research.

Commenting on her appointment, Lady Hale said: “I am delighted to be rejoining the academic world as a honorary Professor at UCL. UCL Laws is a ground-breaker in its work on the judiciary and the judicial system and I hope to be able to make a real contribution to that - and one which will have a real impact upon the everyday lives of real people.”

Professor Piet Eeckhout, Dean of UCL Laws, said: “Lady Hale’s decision to accept our offer of a honorary professorship is very exciting news for the university. She has been a leader at the top level of the UK legal system and a strong proponent of the values of justice, fairness and equality for which the law stands – and which are at the heart of UCL’s foundational ethos.  She has been an exemplary President of the Supreme Court: articulate, determined, fair, and collegiate.

“Our students and staff will benefit from all of this experience and are extremely excited to have such an inspirational role model in our midst.”

Image: Baroness Hale at the re-opening of Bentham House in 2018