Dr Martins Paparinskis gives the inaugural edition of the Angelo Piero Sereni Lecture ‘The Indispensable Third Party Principle’ at the University of Bologna. 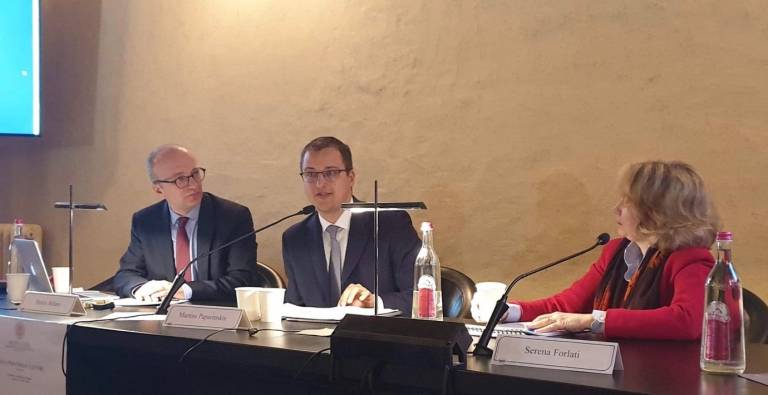 Dr Martins Paparinskis, Reader in Public International Law at UCL Laws, gave the inaugural edition of the Angelo Piero Sereni Lecture ‘The Indispensable Third Party Principle’ at the University of Bologna on 11 April. The annual lecture series, of which this was the inaugural edition, has been instituted in honour of Professor Angelo Piero Sereni (1908-1967), a Chair of International Law at the University of Bologna and a leading Italian public international lawyer.

The session was opened by Attila Tanzi and Alessandra Zanobetti (University of Bologna), after which Federico Casolari (University of Bologna) greeted the audience as the Deputy Head of the Department of Legal Studies. Guglielmo Roversi Monaco (University of Bologna) introduced the life and work of Sereni, and Paolo Mengozzi (former Advocate General of the Court of Justice of the European Union) shared his memories of Sereni. Francesco Salerno (University of Ferrara) discussed Sereni at Ferrara, Pasquale de Sena (Università Cattolica del Sacro Cuore) situated Sereni within the 20th century Italian school of international law, and Min. Plen. Andrea Tiriticco (Head of the Service for Legal Affairs, Diplomatic Disputes and International Agreements, Ministry of Foreign Affairs) discussed the contribution of Italian school to practice of international law.

Dr Martins Paparinskis delivered the Sereni Lecture ‘The Indispensable Third Party Principle’. He began by noting the continued relevance to contemporary discussions of Sereni’s writings on international dispute settlement, particularly his 1955 monograph Principi generali di diritto e processo internazionale. Dr Paparinskis then explained the importance of the indispensable third party principle, and focused the discussion on its six key aspects: the principle’s source, character, institutional scope, personal scope, effect on matters settled by other institutions, and effect on international cooperation. His main argument was that apparent inconsistencies of practice could be explained by drawing a distinction between two conceptions of the principle – one that flows from consensual underpinnings of the traditional inter-State dispute settlement, and another one based on a broader conception of judicial propriety and due process. Once properly conceptualised, the indispensable third party principle can operate as a power, rather as an obstacle, for modern international co-operation and dispute settlement.

You can view the programme for the Sereni Lecture here. 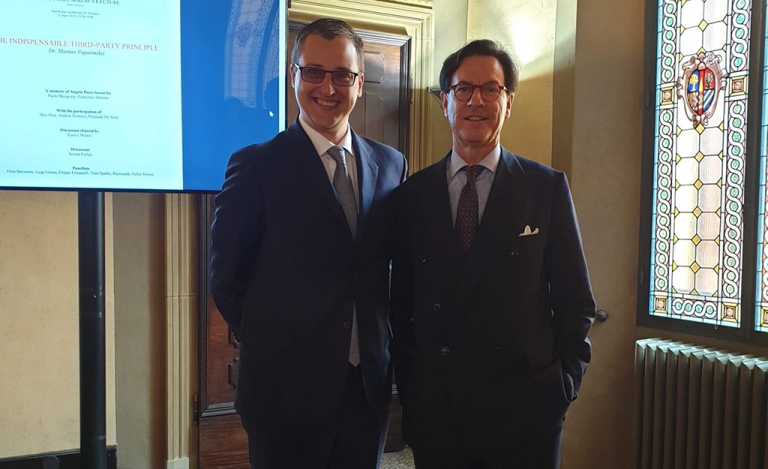 Dr Paparinskis with the host, Professor Attila Tanzi, before the Sereni Lecture