The Senior Mooting Competition is a year-long internal mooting competition for UCL LLB students, organised by the UCL Law Society.

The 2017/18 competition began in October last year with over 40 of the best and brightest second year, third year, and affiliate students participating.

After five rounds of outstanding mooting on tort and trusts law problems, Ben Cartwright, Lai Yan, Su-Lynn Kok, and Darren Foo emerged as the Finalists of the competition.

The Grand Finals moot problem concerned fiduciary duties and constructive trusts, and was written by Professor Ben McFarlane, Professor of Law at UCL Faculty of Laws. It was a privilege to have the moot presided over by The Rt. Hon. Lord Michael Briggs, who challenged the mooters with incisive judicial questioning and insightful comments.

In an unprecedented twist of events, the mooters were also given a new case (Brinks Ltd v Abu-Saleh [No.3]) ten minutes before the session began, and asked to consider it in their submissions before the court. 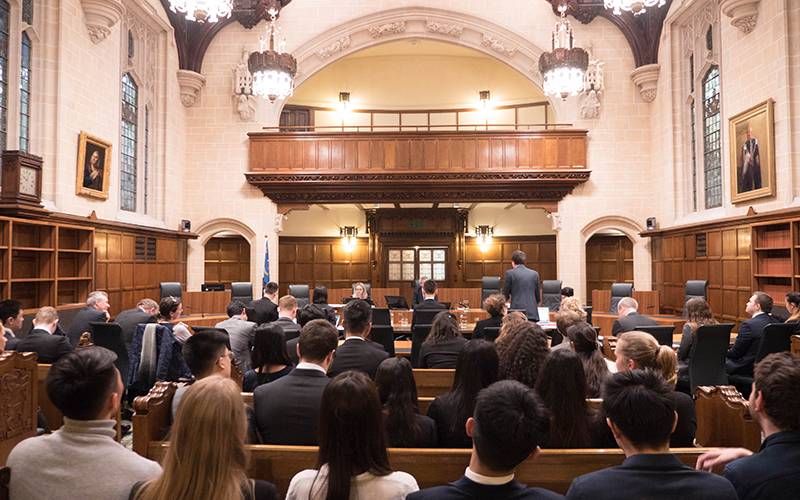 All four mooters were well-researched, presented excellent cases with composure and flair, and dealt with the surprise new case well. The results were close and the ultimate decision was a narrow one.

Congratulations to Lai Yan who emerged as the winner and Darren Foo who was the runner-up.

‘The Senior Mooting Competition has brought my law syllabus to life for me, and has given me many insights into what life as an advocate is like. I really value the opportunities to meet practicing advocates and members of the judiciary, and learning what they enjoy about their jobs.’

The UCL Law Society would like to extend their gratitude to Slaughter and May for their support and annual sponsorship of the SMC, and to the Faculty for their advice and support throughout the competition.

Congratulations again to all four finalists, and well done to all who participated in SMC 2017/18 for a year of outstanding mooting.

See more pictures of the competition