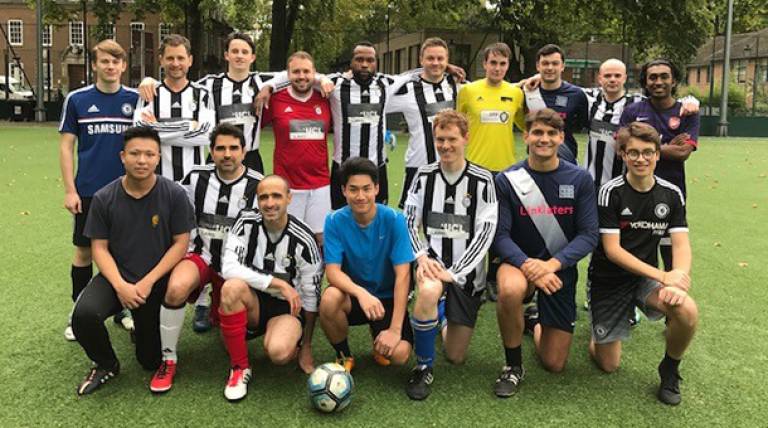 To the array of students, young professionals, dog-walkers, and miscellaneous members of the general public, the well-trodden thoroughfare between the UCL School of Pharmacy, Brunswick Square Gardens, and The Foundling Museum, seemed entirely ordinary just before midday on 9 October 2017.

The weather was especially mild for the time of year. Bouts of warm sunshine, only irregularly interrupted by the appearance of a fluffy white cloud, bathed the football pitches at Coram’s Fields with temperatures of up to seventeen degrees Celsius. A handful of leaves of a golden and reddish-brown hue had fallen on the ground, but, given the sixty degree humidity, the scene was far from an autumnal one overall.

Slowly, and by degrees, athletic young individuals began to make their arrival in shorts and other sportswear. Some carried bottles of water or of brightly coloured, glucose-rich liquids. Their manifestation soon indicated, to the excited and the excitable onlookers, that a match was about to take place – a big match, a special match – the kind of match that cannot fail to produce a sense of overwhelming euphoria, even to the most die-hard neutral. 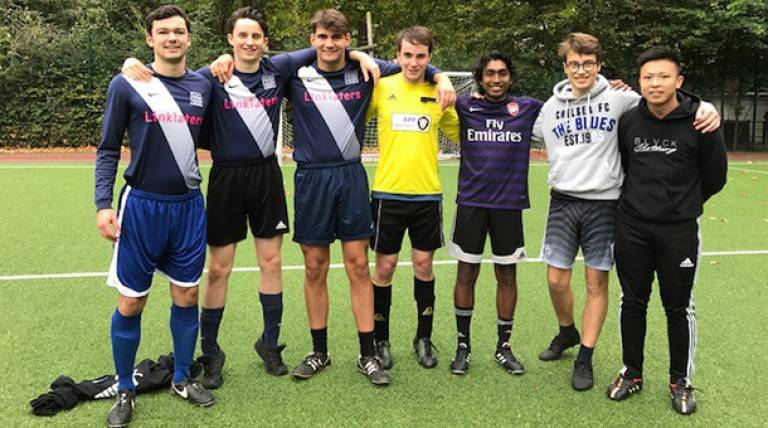 It was the first time in the academic year that the freshly-faced LLB students of the Faculty of Laws would face the notoriously well-organised, well-trained, and well-dressed Bentham Academicals FC (composed of LLM students, PhD students, at least one LLB student, professional services staff, and academic staff). No one actually seems to be able to remember the final score-line from the last time that these two sides met, but it is fair to assume that the latter were the winning team.

Having failed to train since their monumental 2 – 2 draw with Birkbeck on 27 September 2017 (who, last season, beat them 0 – 6), the Bentham Academicals were arguably ill-prepared for this occasion. Most notably, their undisputed man-of-the-match from the previous league fixture – LLM candidate and goal machine Ignacio (Appearances: 1; Goals: 2) – was absent without leave. Nevertheless, form is temporary and class is permanent, and the Bentham Academicals have a significant level of both of these attributes.

Absenteeism and injuries had forced upon the Bentham Academicals a number of changes to the starting eleven. Ignacio’s absence led to Peter Lythe being called forth as centre-forward. Oliver’s poor scheduling system, and thus his decision to do some form of marathon instead of running up and down our right wing, led to various bits of reshuffling.

Instantly, as the game commenced, it was clear that the game would be played at a pace that often is unsurpassed outside of the top two or three divisions of English football. 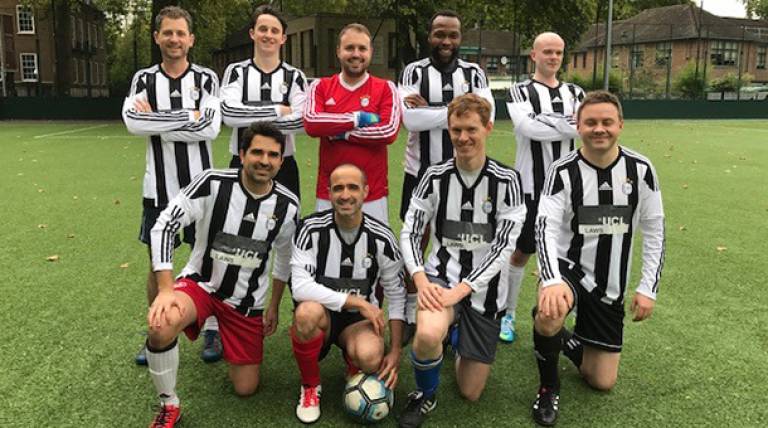 The opening few moments saw a rugged battle for midfield dominance, before the game descended quickly into the end-to-end playstyle that one would perhaps witness in the cup final of the Johnstone’s Paint Trophy (or whatever that competition is called these days). Corner followed corner, crunching tackle followed crunching tackle, and bursting pace followed bursting pace, at both ends of the pitch.

The first half ended 0 – 0, despite the persistent goal-mouth activity. Many a shot was fizzed in low and hard, but each goalkeeper – Julius Grower and Matthew Allen – rose to the challenge each time. The best chance of the half came from Gabriel for the Bentham Academicals, who surged into the LLB penalty area and rifled a shot which ricocheted off the left-hand post like a weathered pebble off the glassy surface of a fresh water pond.

Following a cordial switching of ends at half-time, the game resumed anew. Despite the almost non-existent half-time interval, during which one could regain one’s breath, the pace and the intensity of the match only intensified. To the dismay of the Bentham Academicals, the LLB students began to boss the middle of the park.

Nikhil Coomaraswamy, the ever-reliable centre-back for the LLBs, would distribute the ball to strongman Will Davies in midfield, before Jack Helyar and Rhys Williams would take it in turns to drive towards their opponents’ over-stretched defenders.

Ten minutes into the second half, the first cataclysmic blow came to the Bentham Academicals’ hopes and dreams. Skipping into the penalty area with the agility of a mongoose and the poise of a swan, Jack rifled the ball into the net. This inflicted a significant pain of disappointed expectation upon the Bentham boys, but this was offset significantly by the pure pleasure and the unadulterated elation that was experienced by the LLB players. It was 0 – 1.

Despite a number of extremely promising ventures into enemy territory, the Bentham Academicals could not find a breakthrough. The ensuing few minutes saw a plethora of shots on goal for the lads in black and white, some of which were tantalisingly close to going in – by Henry, by Peter, and by Ben, to name but a few – while other attempts ballooned over the fence and into a neighbouring childcare centre.

Fifty minutes into a sixty minute-long fixture, Rhys broke on the counter-attack and the Bentham Academicals players were either completely stationary, unable to match the youngster’s blistering pace, already suffering cardiac episodes, or a combination of the three. He drilled the ball low and he drilled the ball hard, right into Grower’s net, who could get nowhere near it. Even Peter Shilton would have struggled to get there, or even a comparatively inferior goalkeeper that the LLB players can remember in their lifetimes. It was 0 – 2.

The final whistle eventually pierced the air, with no noteworthy comeback effort from the Bentham Academicals in the dying seconds. Regardless of some of the high-octane and slick passing-football that was on display, the game ended in defeat. Worst of all, Prince limped off in the first half with suspected ligament damage, whose absence in the next fixture – against Goodenough College on 19 October – is not something anyone is yet willing to contemplate.

If you would like to get involved, please email: ben.mcfarlane@ucl.ac.uk or christopher.riley.14@ucl.ac.uk