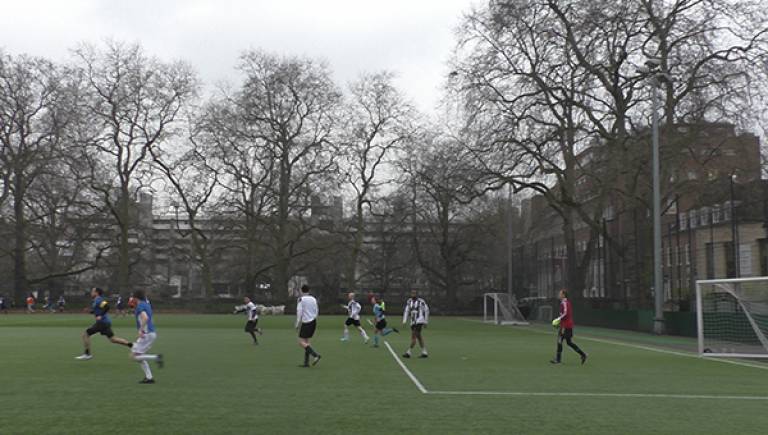 Having ended 2016 on the back of three consecutive victories in the Coram Fields First Division, and sitting sixth in the table, the searing form of the Bentham Academicals rapidly cooled from a rolling boil to a lukewarm simmer, then essentially to room temperature.

A first defeat came on a cold and grey afternoon on 19 January, where the UCL Laws side ultimately succumbed to a devastating 5–0 obliteration to a Children’s Society team who were formerly one place below them in the league. A further heart-wrenching blow arrived in the form of the Independent Police Complaints Commission (IPCC) on 9 February. Following a fierce affray in all areas of the pitch, the IPCC centre-forwards scored two second-half wonder goals from outside of the box without reply from the Bentham Academicals. It ended a cataclysmic 2–0.

The Bentham Academicals were wracked by injuries and by the shake-up of an insurmountably rigid midfield, but they were far from despondent or downtrodden. A particular reason for their continued high morale, despite the previous two losses, was the cameo appearances of several bright-eyed and quick-footed young guns from the LLM and LLB programmes.

The next fixture, and by far the biggest challenge of the latter half of the campaign, was against a high-flying Warner Bros. side on 9 March, who, going into the Christmas break, were second in the table and were only behind the leaders UK Sport on goal difference.

It was a bright and sunny spring afternoon as the Bentham Academicals squad began to assemble at Coram Fields ahead of kick-off. The lads warmed up with a brief series of stretches and a short kick-about, before putting on their famous black and white kits and sipping from bottles of electrolyte-rich sports drinks with vivid colours not found in nature. Their opponents from Warner Bros. soon arrived in their droves and in their striking navy blue strips.

Opting for a revised formation of 2-4-1, captain Professor Ben McFarlane moved Henry into central midfield from his ordinary position in central defence, and moved Chris from the right flank to link up with Connor at centre-back. From the opening minutes, the new formation and revised strategy looked to be paying dividends. The Bentham Academicals began to see the majority of possession, and the opening stages of the game settled in and around the centre of the park and the first third of Warner Bros.’ territory. The unshakability of Henry fused synergistically with the agility of Frederic, with regular through-balls to Oliver or to Adeyanju waiting to cause havoc on either side of the pitch.

In the opening twenty-nine minutes, the UCL Laws side continued to have the far greater proportion of opportunities—winning several corners in quick succession, and knocking a series of shots just wide of the Warner Bros. goalmouth. The breakthrough came in the twenty-ninth minute, following a series of inch-perfect one-two passes in the opponent’s half. The ball broke to the feet of Henry, who surged forward with the unstoppable velocity of an intercontinental ballistic missile. Bobbing to his left before weaving to his right, he outwitted the Warner centre-backs and unequivocally rifled a shot into the bottom left hand corner of the goal. A newly-congregated number of members of the general public – who had postponed their lunch breaks to watch some smooth, fluid and dynamic football—were sent into raptures at the magic they had just witnessed.  1–0. (29’). 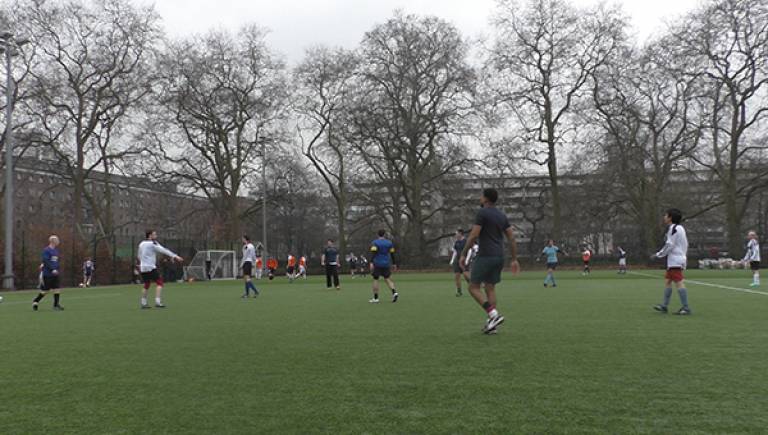 What came next was sudden, unexpected, and appeared to be in complete contradiction to the run of play of the entire first half. Immediately from kicking off after going a goal down, Warner Bros. piled forward. They made the most of their lightning-quick right-winger, who caused a total collapse of composure dramatically to fall upon the Bentham Academicals. Their winger fizzed in a low cross from within a few paces of the corner quadrant, before the Warner Bros. striker slotted home from 5-6 yards out. 1–1 (30’).

Then came a further slap in the face when, with build-up play that was almost a carbon copy of the passing that outwitted the UCL side moments before, Warner Bros. struck again. With the early afternoon spring sunshine relentlessly blazing in his eyes, Peter dived but could not stop the incoming shot. 1–2 (31’). The half-time whistle blew, and the Bentham boys were dumbfounded at the series of events that had unfolded in the previous 120 seconds, but they were far from finished.

The second half began in much the same manner as the first, but the Warner Bros. were oozing with confidence after turning around a one-goal deficit in two short minutes at the end of the first half. It was now that their credentials as a top-two side began truly to manifest itself. Within the opening ten minutes of the half, they once again surged forward and displayed the type of clinical finishing that the Bentham Academicals seemed sorely to lack. 1–3. (42’).

After going 1–3 down the Bentham Academicals began to play with freedom and without fear. A luscious inch-perfect pass from Gabriel found Oliver, who darted towards goal like a bluefin tuna. One-on-one with the goalkeeper, he picked his shot with care and struck it with apparent precision, but mouths dropped aghast as the shot went millimetres wide and collided with the upright.

From distributor to recipient, moments later it was Gabriel who rallied forth, having received a pass from central midfield. Dodging to his right, and around the individual charged with closing him down, like a trebuchet he rifled a powerful shot from inside the Warner Bros. area and into the bottom right corner of the goal. 2–3 (50’). Five minutes later another chance came, with a scramble inside the Warner Bros. box subsequent to a corner, but the ball ricocheted against the clean white post once again. However, the Bentham Academicals could not capitalise on their newly-found momentum and lost focus upon the light at the end of the tunnel when, with what was to be the final chance of the half, the Warner lads ventured forward. Dancing into the Bentham box, the striker fandangoed to the right before in slid Chris with a timely interception. But, not expecting his centre-back to get there, Peter dove the wrong way, as the ball fortuitously broke to the Warner Bros. centre-forward who had kept his balance and remained on his feet. He slotted home to end the game at 2–4 (58’).

In spite of the heavy loss, the Bentham Academicals squad was in buoyant spirits after the full-time whistle. It was the third defeat in succession, but this performance, against one of the league’s top outfits, demonstrated that they have the individual tacticians and the team work ethic to end the final three games of the campaign on a high note. Most importantly, everyone went home having fully maximised their aggregate utility for the foreseeable few days.

If you would like to get involved in our friendly matches each Monday at Coram’s Fields, please email ben.mcfarlane@ucl.ac.uk or chrisriley.uk@gmail.com.