Six open-access books from the Bentham Project, UCL Faculty of Laws, were launched by Professor David Price, Vice Provost (Research), at a UCL Press event on 12 June 2017 in the Wilkins Building 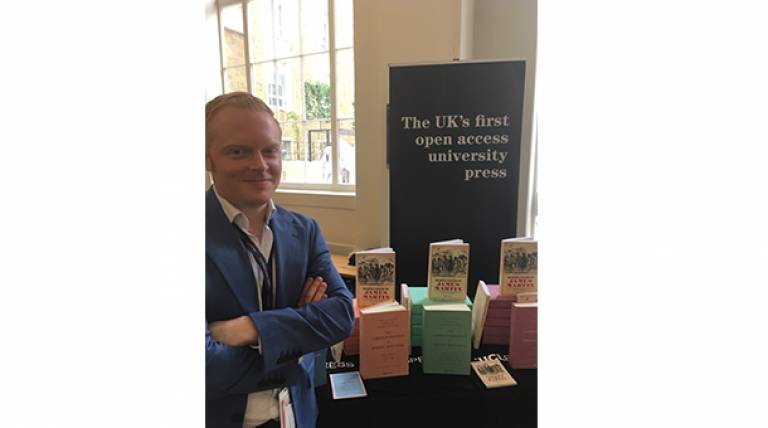 Professor Philip Schofield, Director of the Bentham Project and General Editor of the Collected Works of Jeremy Bentham, then spoke about the books which include the first five volumes of the Correspondence of Jeremy Bentham. These volumes, amongst other things, detail Bentham’s education and legal training, his being called to the Bar in 1769, and his abandoning of his legal career after only one case in favour of reforming the law, society, and politics based upon the principle of utility.

Also launched at the event was Memorandoms by James Martin, edited by Dr Tim Causer, Senior Research Associate at the Bentham Project. The Memorandoms tells the story of the most famous of all escapes from Australia by transported convicts, that led by William Bryant. On the night of 28 March 1791 the Bryants, with their two infant children, James Martin, and six other male convicts stole a fishing boat and sailed out of Sydney Harbour and out into the Pacific. They reached Kupang in Dutch-controlled Timor on 8 June, though were subsequently identified as escaped convicts, and were ordered to be shipped back to England to face trial – where the renowned lawyer James Boswell lobbied the government for their release.

‘The Memorandoms is a real jewel in UCL’s Special Collections: it is the earliest Australian convict narrative, and the only known narrative written by a First Fleet convict. I’m hugely grateful to UCL Press for making this highly significant document available to all for free’.

The Memorandoms reproduces the original manuscripts alongside an annotated transcript, and includes an introduction which provides a fresh perspective to this often formulaically told tale, and strikingly reveals just how far some modern historians have departed from the historical record when telling the story. Returning from transportation was a capital offence, and the book also sheds some light on why, when they were returned to England, the surviving escapees did not suffer the full penalty of the law.

The Memorandoms was acquired by one of Britain’s great philosophers, Jeremy Bentham, perhaps the first and one of the most influential critics of transportation to Australia. The vast Bentham archive is held in UCL’s Special Collections.

The first five volumes of the Correspondence of Jeremy Bentham contain over 1,300 letters written both to and from Bentham over a 50-year period, beginning in 1752 (aged three) with his earliest surviving letter to his grandmother, and ending in 1797 with correspondence concerning his attempts to set up a national scheme for the provision of poor relief. Bentham’s educational ideas were the inspiration for the founding of UCL.

Thanks to UCL Press, the UK’s first fully open-access university press, Memorandoms by James Martinand the Correspondence of Jeremy Bentham are now available to download for free.

Find out more about the Memorandoms and free download it

Read more about the Bentham Project