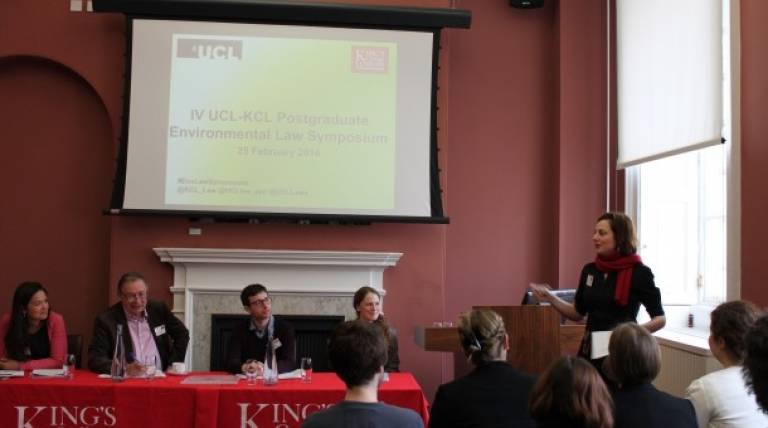 Just two months after the world kept its eyes on the Paris Climate Conference COP 21, the Fourth Postgraduate Environmental Law Symposium was held on 25 February 2016 at The Dickson Poon School of Law, King’s College London. The Symposium hosted presentations by around 20 researchers who gathered in London from universities in 10 different countries – from Canada to France and Norway, passing by Brazil. The conference confirmed its importance as an important platform for young scholars to share their ideas on environmental law in a subject-specific and supportive environment, also with the view to publish their work.

Jointly organised by PhD students of King’s and University College London Ioanna Hadjiyanni (KCL), and Priscilla Carvalho (UCL) the conference is now in its fourth year and was generously funded by The Dickson Poon School of Law, the UCL Centre for Law and the Environment and the UCL Faculty of Laws.

The Symposium was organized in six sessions, chaired by professors and academics of both Law Schools. A glance at the title of the panels offers insight on the variety of enriching discussions carried throughout the day: ‘Procedural Requirements in Environmental matters’ (Professor Richard Macrory, UCL), ‘International Law and the Environment’ (Dr Megan Bowman, KCL), ‘Climate and Environmental Justice’ (Dr Eloise Scotford, KCL), ‘the Regulation of Low-Carbon Technologies’ ( Chiara Armeni, UCL), ‘Social Issues of Environmental Law’ (Dr Emily Barritt, KCL and C-EENRG) and ‘Coordinating Different Legal Frameworks’ (Professor Joanne Scott, UCL). This year, alongside traditional oral presentations, the Symposium welcomed for the first time poster presentations, which helped stimulate discussions during breaks and gave students the chance to sum up their research in a visually impactful format.

The opening speech given by Professor Richard Macrory set the pace of the conference: a friendly and academically rigorous ambience for scholars to share and test their thoughts. He stressed the importance of engaging in dialogue and exchanging ideas.  In addition, Dr Bowman, Assistant Editor for Transnational Environmental Law (Cambridge) also welcomed the participants and invited the presenters to submit their papers to the journal in view of a possible publication. She stressed the importance of providing opportunities to young researchers for disseminating their work. Throughout the conference, presenters and attendees entered into juicy discussions and received great advice on their work, and valuable feedback from their peers and from top experts in the field.

Environmental law problems are often intrinsically trans-boundary or even global – and it is no surprise that the attendees hailed from such disparate countries. One of the fundamental challenges of environmental law is its transnational and cross-jurisdictional nature. Therefore, presenters addressed issues rising from various jurisdictions, comparing them and suggesting approximations, bearing witness to the scholarly rigour of the Symposium. Discussions on how different countries could draw inspirations from each other’s environmental information regimes were followed through the use of legal transplant theory. A common theme of the Symposium was the need for approximation of procedural requirements and substantive policies. Further debates reflected the challenges of regulating different kinds of environmental problems at multiple levels of governance, with the involvement of multiple actors. Questions such as ‘Is there an institutional overlap or unnecessary duplication in scope?’ were considered by critical examinations of the relationship between different actors.

The traditional categories of environmental law, and indeed the notion and the very utility of environmental law itself were challenged by brilliant students also coming from non-environmental law backgrounds. Their fresh perspectives from gender studies and anthropology sparked great debate in the audience. Interdisciplinary contributions provided added value to the meeting, contributing to its highest intellectual standard.

The Symposium also hosted presentations on less explored areas of environmental law, such as deep seabed mining in international areas or water-related issues arising in mining projects. These presentations proved highly interesting for they are ground breaking in the scholarly debate on these topics. They offered a precious insight into possible development of subjects where the stakes are high, but in which there is little or no attention from the public.

As the reaction from the participants confirmed, the Fourth UCL-KCL Postgraduate Environmental Law Symposium confirms itself as an excellent platform for debate, opportunity for publications, and a fundamental rendez-vous for the future and leading experts of environmental law. This annual symposium has gradually become a cherished tradition and an invaluable event contributing to and building the community of environmental law researchers.