Natalie Ohana-Eavry, a PhD student at UCL Laws, has been named as the postgraduate-student engager of the year at the Provost’s Awards for Public Engagement. 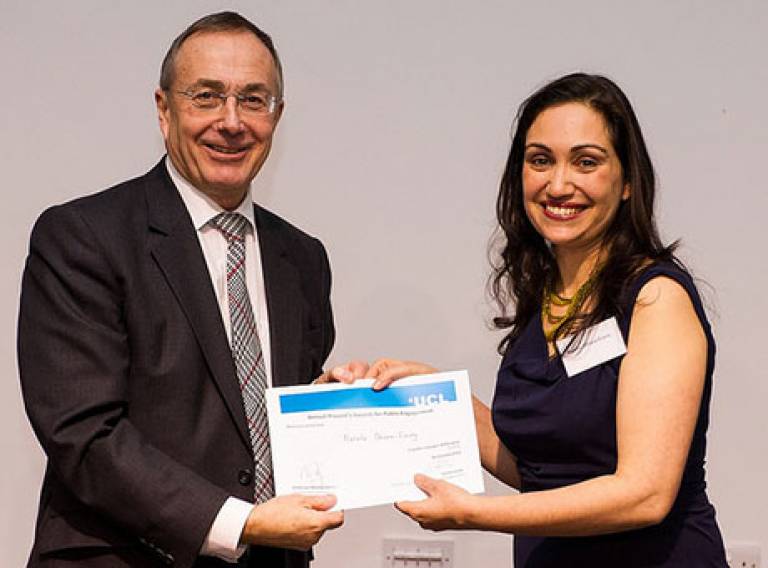 The awards, now in their sixth year, recognise the academic value in integrating research work with public engagement and celebrate the valuable support provided by the UCL Public Engagement Unit to students and staff.

Natalie was nominated for her award for the innovative project she developed during her studies at UCL Laws to better understand the ways people experience the legal system. Through the use of art as a means of expression, Natalie sought to reveal the subtleties of legal experience and its multi-layered nature.

The idea for the project grew from Natalie’s experience as a lawyer at a refuge for women fleeing domestic violence in Jerusalem. As part of a multi-disciplinary team consisting of social workers, psychologists and art therapists, she realised how art enabled women to express intense and complex realities that could not be articulated through language alone.

Moving from practice to full-time research in London motivated Natalie to further pursue her idea. “My research focuses on the gap between women’s experience of domestic violence and law’s understanding of it. Working in the library or at a computer screen, I felt my research required me to stay in touch with women subjected to legal processes in situations of domestic violence.”

In her second year, and with the support of Professor Jane Holder and Laura Cream of the UCL Public Engagement Unit, Natalie began to put together a plan to bring the project to life. After six months of research, she began a collaboration with Sue Challis, a participatory and community artist, and Solace Women’s Aid, a London-based charity that supports women and children affected by domestic and sexual violence.

After receiving funding from UCL Laws through the PhD Research Impact and Innovation Fund (PRIF), Natalie and Sue started to design a three-day art and dialogue workshop in the Women’s Refuge in Enfield, North London. During the workshop, Natalie provided the participants with the space, time, materials and support to explore their experiences with the legal system, outside of the confines of written and verbal legal language. With the aid of Sue, she encouraged the women to explore their perspectives, opinions and criticism through creativity, breaking down their experience of the legal system into three areas: the police, solicitors and barristers, and the courtroom. Leaving traditional figurative drawing behind, they practised mark-making using materials like chalks and pastels, employing different intensities, colours and shapes to represent complex and subtle experiences.

View the album in full and descriptions of each image

“It was very powerful,” recalls Natalie. “With art, we were able to speak in a different language. This initiated deeper dialogues that followed the artworks. Art broke the language, and gave the women new tools for expression. I was able to understand the legal experience in depth and clarity that could not have been seen through language”.

The workshop provided the women with an intimate and safe space to express themselves, and Natalie recognises that this was for many of the participants the first time that they had been asked about their perspective of the legal system. She explains, “The women wanted to be there for themselves. They wanted a platform to express their experience and deliver messages that were important to them.”

In one activity, the women made masks of their own solicitors and masks of their idealised solicitors, as they would imagine them. The women then made short videos wearing the masks and speaking as the solicitors those masks represented.

In her nomination statement, Professor Jane Holder described how Natalie’s project has developed: “an important dimension to the work of the Faculty of Laws, because it places at its centre women who have been subject to legal processes and empowers them to tell their story, rather than the more usual relations of mutual professional development between the Faculty and solicitors, judges and barristers.”

Natalie’s project has helped uncover the limits of legal language, and the difficulties in translating real, lived experiences into official terms and processes. Her research interests lie in the analysis of trauma in the context of the legal system and after completing her PhD, Natalie aims to research the legal understanding of trauma – both on an individual and a national level. She sees possibilities for greater collaboration with artists and art itself, as well as new opportunities to engage in a deeper, more holistic exploration of trauma, both in relation to how people who went through trauma experience the legal system and how the legal system understands the reality of trauma itself.

In its comments, the panel for the Provost’s Awards for Public engagement cites Natalie’s “profound commitment to academic-public engagement” as one of the outstanding features of her work. The panel praised the range and quality of engagement taking place at UCL, and its growing value in the eyes of UCL’s staff and students, and the wider community.

Describing her own reaction to winning the award, Natalie said: “It is very important for me to understand that the potential embedded in public engagement for academic research is acknowledged and praised. It is a huge boost of energy and motivation. This has been the perfect opportunity to look back at what I’ve achieved and to share it with my family.”

Read the blog from UCL News

View a gallery of images from the awards’ ceremony