On Sunday, 18 January, UCL Laws students Soo Han Ng and David Lim joined over 30 teams from across the UK to compete in the Inner Temple Inter-Varsity Moot and won the coveted Bhutan Cup as their own. 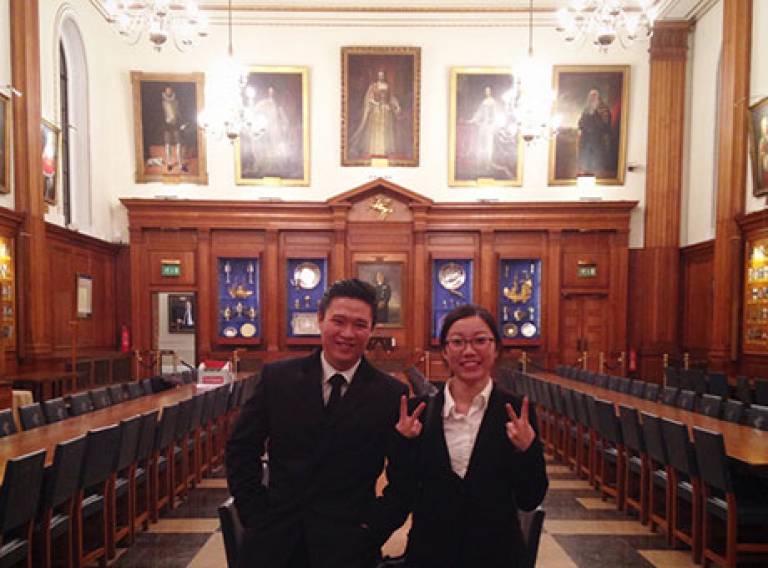 Contesting issues of incorporation of contractual terms, common law lien, conversion and conspiracy, the UCL Laws team took on the respondent’s role in the finals. In an intensely-debated final round, third and second-year LLB students Soo Han and David narrowly lost out and were awarded runners-up by the Inner Temple judging panel, made up of senior silks and judges of the bench.

Throughout the day of the competition, participants took part in a range of activities, including a speed moot, running alongside the competition to develop their advocacy skills. The prestigious Bhutan Cup trophy, donated to the Inn by the King of Bhutan, was awarded to the winning team at the end of the competition, along with a mini-pupillage at the chambers of the main competition sponsors.

During the competition, the teams had to prepare both the appellant’s and respondent’s cases, and only learned of their allocation five minutes before each round began. “The difficulty with the moot was that we were given the task of arguing both positions,” Soo Han explains.

“This required a thorough understanding of the strengths and weaknesses of the parties’ cases and to play on that accordingly in each round. We were always on the search for this higher-level argument to trump what we had just thought of for the other side.”

This proved to be one of the most memorable aspects of the competition as a whole for the team. “We particularly enjoyed arguing for the respondent in our third (quarter-final) and fifth (final) rounds,” recalls Soo Han. “The role allowed us to engage with the contentious issues directly. It felt like there was an on-going conversation with the applicant and the panel of judges”

“Getting the chance to moot in such a highly competitive environment was quite the experience,” David adds. “A thrill overshadowed only by the rigorous scrutiny of the judges at hand. Quite the unforgettable Sunday out!”