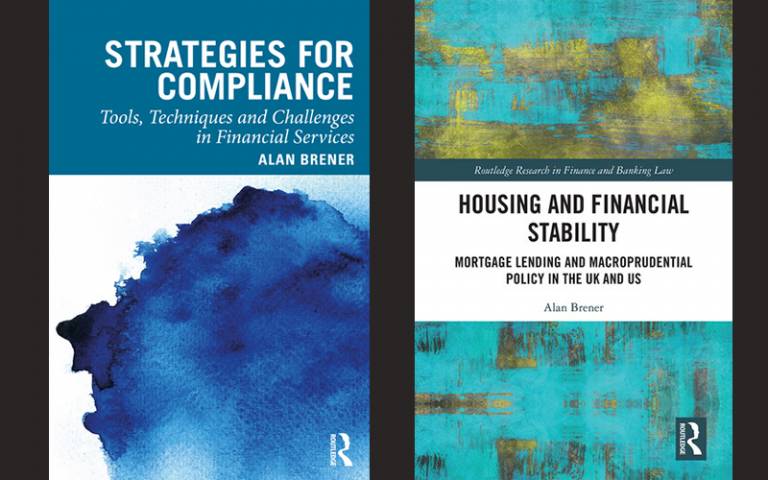 Introducing: Housing and Financial Stability: Mortgage Lending and Macroprudential Policy in the UK and US, (Routledge, 2020); and Strategies for Compliance: Tools, Techniques and Challenges in Financial Services, (Routledge, 2021)

A double book launch for

Dr Alan Brener, Housing and Financial Stability: Mortgage Lending and Macroprudential Policy in the UK and US, (Routledge, 2020)

Housing and Financial Stability: Mortgage Lending and Macroprudential Policy in the UK and US
The book addresses the relationship between housing policy, credit and financial instability in the light of the recent global financial crisis, and proposes both short and long-term solutions. Although it is not known where the next crisis will come from, history suggests that it will have credit and property at its source. Thus, it is important that the UK and other countries look more broadly at what should be done in terms of policies, institutions and tools to make the housing market and mortgage lenders more resilient against a future crisis. This book sets out a number of workable proposals. Central to this work are questions relating to the quantitative macroprudential measures, such as loan-to-value (LTV) and debt-to-income (DTI) restrictions, and whether these can be used to any significant extent in western democracies and, if employed, whether they are likely to be effective. In particular, the book questions the political legitimacy of their use and the potential consequences for the institutions, such as central banks, promulgating such policies. Preserving financial stability in very uncertain market conditions is of key importance to central bankers and other regulators, and macroprudential policy is a rapidly growing subject for both legal and economics study.

Strategies for Compliance: Tools, Techniques and Challenges in Financial Services
The author, as a former experienced compliance practitioner and regulator highlights compliance challenges, using examples such as Wells Fargo, whistleblowing in the financial services, issues with corporate governance, and the mis-selling of payment protection insurance in the UK banking sector.  Developing the right ethics and culture is central to ensuring that firms operate compliantly. The book explores strategies for creating compliant cultures and fostering regulatory trust.

Speakers
Professor Iris Chiu is Professor of Corporate Law and Financial Regulation at the Faculty of Laws, University College London and Director of UCL’s Centre for Ethics and Law
Dr Anat Keller is a Lecturer in Financial Law at the the Dickson Poon School of Law at King’s College London

More about the speakers

Prof. Dr. Rosa María Lastra is the Sir John Lubbock Chair in Banking Law at the Centre for Commercial Law Studies, Queen Mary University of London. She is a Research Associate of the Financial Markets Group of the London School of Economics and Political Science, and member of: the Monetary Committee of the International Law Association, the European Shadow Financial Regulatory Committee, the European Banking Institute, the European Law Institute, the Financial Market Law Committee Sovereign Debt Scoping Forum, and P.R.I.M.E. Finance Panel of Experts.
She has served as a consultant to the International Monetary Fund, the European Central Bank, the World Bank, the Asian Development Bank, the United Nations (UNCTAD), the Federal Reserve Bank of New York, the UK House of Lords and the European Parliament (of the expert panel on monetary affairs since 2015 and of the expert panel on Banking Union (Resolution) since 2016).

Prior to coming to London she taught in Columbia University School of International and Public Affairs in New York and worked at the International Monetary Fund in Washington DC.  She studied at Valladolid University, Universidad Autónoma de Madrid, London School of Economics and Political Science and Harvard Law School (Fulbright Fellow).

Dr Alan Brener, is a Lecturer (Teaching) at University College London’s Laws Faculty and he is also Deputy Director of the Faculty’s Centre for Ethics and Law.

Prior to starting his PhD Alan worked for Santander UK and was responsible, at different
times, for the compliance and retail legal departments and regulatory policy. Before joining
Santander in 2005, from 1996, he headed the compliance departments for the retail banking divisions of Natwest and RBS banks. From 1989 to 1996 Alan was a senior prudential and conduct of business regulator for the insurance and collective investments sectors having previously worked on aspects of public policy at the Department of Trade and Industry.

Most recently, prior to starting his PhD, Alan was on secondment from Santander helping
to set up the Banking Standards Board with the objective of improving standards of
conduct and professionalism within the banking industry.

Professor Iris Chiu is Professor of Corporate Law and Financial Regulation at the Faculty of Laws, University College London. She previously taught at the School of Law, King’s College London and the University of Leicester. She was a legislative draftsman and State Counsel at the Attorney-General’s Chambers in Singapore prior to joining academia. She has published on directors’ duties, shareholder stewardship and corporate governance, as well as regulatory theories and governance in the financial sector.

Dr Anat Keller is a Lecturer in Financial Law at the Dickson Poon School of Law, King's College London. Dr Keller is also a Research Fellow at the Centre for Data Analytics for Finance and Macroeconomics at King's Business School. She previously taught at the Faculty of Laws, University College London (2007-2016). She holds a PhD from Queen Mary University of London (Centre for Commercial Law Studies), an LLM from the London School of Economics and first-class degrees in Management and Law (magna cum laude). Dr Keller is a qualified solicitor and serves as a Deputy Chief Examiner of the University of London. Her recent book, 'Legal Foundations of Macroprudential Policy: An Interdisciplinary Approach', was published in 2020 (Intersentia).

If you have any queries about this event please contact the UCL Laws events team on laws-events@ucl.ac.uk