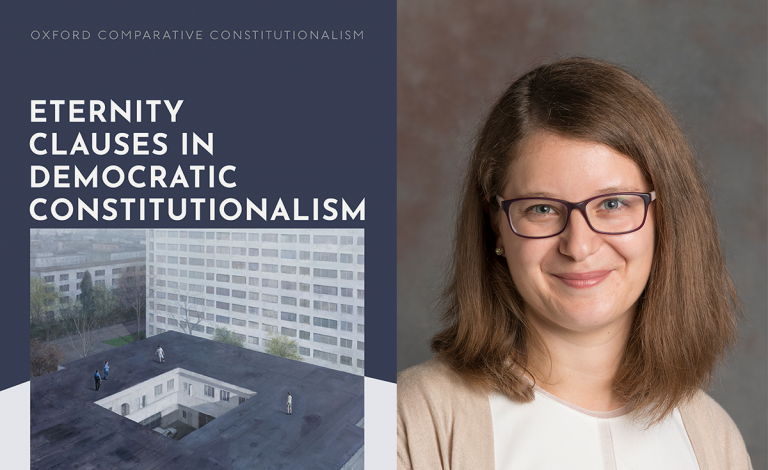 This event has been organised by UCL Laws

About this Book Launch:

This book represents a unique analysis of unamendability in democratic constitutionalism that engages critically and systematically with its perils, offering a much-needed corrective to existing understandings of this phenomenon. Whether formalised in the constitutional text or developed as part of judicial doctrines of implicit unamendability, eternity clauses raise fundamental questions about the core democratic commitments underpinning any given constitution.

The book takes seriously the democratic challenge eternity clauses pose and argues that this goes beyond the old tension between constitutionalism and democracy. Instead, eternity clauses reveal themselves to be a far more ambivalent constitutional mechanism, one with greater and more insidious potential for abuse than has been hitherto recognised. The ‘dark side’ of unamendability includes its propensity to insulate majoritarian, exclusionary, and internally incoherent values, as well as its sometimes purely pragmatic role in elite bargaining. The book adopts a contextual approach and brings to the fore a variety of case studies from non-traditional jurisdictions. These insights from the periphery illuminate the prospects of unamendability fulfilling its intended aims, protecting constitutional democracy foremost among them. Its promise most appealing in transitional, post-conflict, and fragile democracies, unamendability reveals itself to be ironically both less potent and potentially more dangerous in precisely these contexts.

Silvia Suteu is Associate Professor at University College London, Faculty of Laws. She specialises in comparative constitutional law and constitutional theory, with a focus on comparative constitutional change, gender equality, and participatory constitutionalism. At UCL, she has convened the Public Law Group, edited the Current Legal Problems journal, and is the gender editor for Lex-Atlas: COVID-19, a global academic project mapping legal responses to the pandemic. She sits on the executive committee of the UK Constitutional Law Association, having previously managed the UK Constitutional Law Blog, and was formerly an Associate Director of the Edinburgh Centre for Constitutional Law. She has provided legal expertise on constitution building to organisations including Democracy Reporting International, the Euromed Feminist Initiative, the European Parliament, the European Court of Human Rights, International IDEA, and OSCE, UNDP, UN Women, and the Westminster Foundation for Democracy.

This event will be delivered via Zoom Meeting. We welcome all attendees to keep their cameras on providing they feel comfortable in doing so. Microphones should be off unless asking a question or joining in the discussion. You will receive your zoom joining link 48-hours, 2-hours and 10 minutes before the start of the event. Contact the Laws Events team (laws-events@ucl.ac.uk) if you have not receive the link.