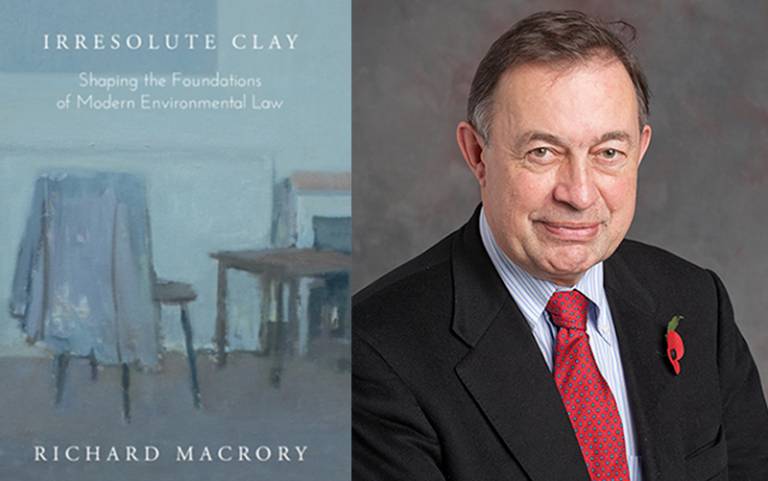 This event will run in Autumn 2020 and a date will be announced in due course.

THIS EVENT WILL BE RESCHEDULED TO AUTUMN 2020.

UCL Centre for the Law and Envronment is pleased to host the launch of Professor Richard Macrory's new book Irresolute Clay: Shaping the Foundations of Modern Law.

This free event will take the form of a conversation with Richard and Lord Carnwath about issues raised in the book to be followed by an informal reception.

At a time of profound change and rethinking, this book provides insights into how environmental law in the UK has developed into its current form, and considers challenges it will face in the future. Irresolute Clay is not a legal history or texbook, nor a conventional set of legal memoirs. Instead it offers a personal account of the inside stories as experienced by one of the key architects of contemporary environmental law. Taking a thematic appraoch, it charts fundamental tenets of the subject (such as environmental sanctions, the European dimension, developing the academic discipline of environmental law, and environmental courts and tribunals), from the beginnings of the modern environmental law era in the 1970s to the present day.

Professor Richard Macrory joined the Faculty in 1999. He had previously been teaching at Imperial College London, and was Director of the Environmental Change Institute, Oxford University. Richard Macrory was a Member of the Royal Commission on Environmental Pollution between 1992 and 2003, and was a Board Member of the Environment Agency in England and Wales between 1999 and 2004. He was the founding editor in chief of the Journal of Environmental Law (Oxford University Press) and is currently legal correspondent to ENDS Report. He was Hon. President of the National Society for Clean Air 2005-6, and chairman of Merchant Ivory Film Productions between 1988 and 2004. In 2001-2003 he was elected chairman of the Steering Group of the European Environmental Advisory Councils, an informal network of official environmental advisory bodies throughout Europe. Professor Macrory is a Patron of the UK Environmental Law Association.

Lord Carnwath of Notting Hill became a Justice of The Supreme Court in April 2012. After studying law at Trinity College, Cambridge, Lord Carnwath was called to the Bar (Middle Temple) in 1968 and took silk in 1985. He served as Attorney General to the Prince of Wales from 1988 to 1994. He was a judge of the Chancery Division from 1994 to 2002, during which time (1999 to 2002) he was also Chairman of the Law Commission. Lord Carnwath was appointed to the Court of Appeal in 2002. Between 2007 and 2012 he was Senior President of Tribunals and led the planning and implementation of the reforms of the tribunal system following the Leggatt report.