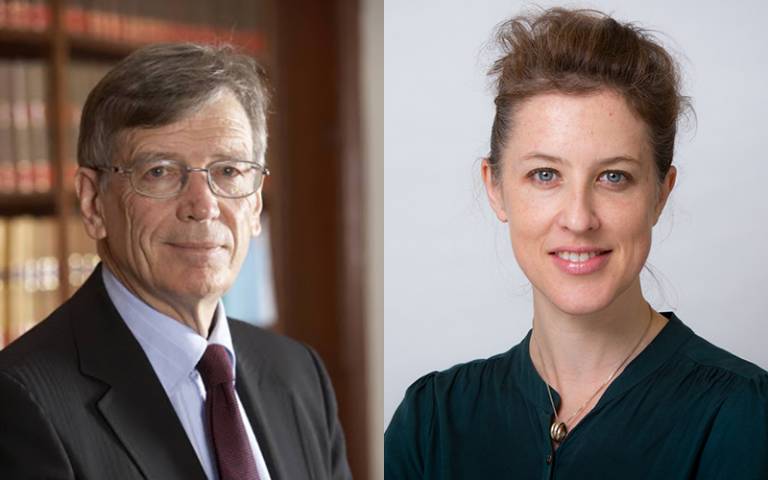 An event to introduce our newest Honorary Professor, Lord Carnwath

Lord Carnwath was called to the Bar by the Middle Temple in 1968 and joined 2 Paper Buildings (2PB) (one of the predecessor sets of Landmark Chambers). He practised mainly in planning and local government law, social security and administrative law. Between 1980 and 1985, he was Junior Counsel to the Inland Revenue. He took silk in 1985. He took part in a number of major inquiries and Parliamentary proceedings relating to major infrastructure projects, including for the Department of Transport and Transport for London.  Between 1988 and 1994 he acted for and advised the Hong Kong Government on issues relating to compulsory purchase, property and rating law.  In 1989 he completed the Carnwath Report on the Enforcement of Planning Control for the Department of the Environment; the main recommendations of which were enacted in the Planning and Compensation Act 1991, paving the way for major reform in the planning enforcement system. In 1988, he was appointed as Attorney General to the Prince of Wales, for which service in 1994 he was made a Companion of the Victorian Order.

He was a founder member and first Treasurer of the Administrative Law Bar Association.

Lord Carnwath joined the judiciary in 1994 as a High Court Judge of the Chancery Division where he remained until 2001, sitting also in the Administrative Court. For the last three of these years he also held the position of Chairman of the Law Commission of England and Wales, where he led or contributed to a number of law reform projects, including reports on the law of Compulsory Purchase, Land Registration, Damages under the Human Rights Act, and Partnership law.

In 2001 Lord Carnwath was appointed to the Court of Appeal (Civil Division), in which he sat until 2012. He wrote many leading judgments, particularly on planning, property, and administrative law. In 2004 he was invited by the then Lord Chief Justice, Lord Woolf, to act as Shadow Senior President of Tribunals, to lead the reform of the system of specialist tribunals, as proposed by Sir Andrew Leggatt in his report, Tribunals for Users. Over the following 8 years he acted as judicial leader for the complete restructuring of these tribunals into a unified system, and its eventual integration with the courts. In 2007 he was appointed first statutory President of Tribunals under the Tribunal, Courts and Enforcement Act 2007.

In April 2012 he joined the Supreme Court, where he continued to sit until his retirement in March 2020. He has given many leading judgments both in the UK Supreme Court, and in the Judicial Committee of the Privy Council, particularly on issues relating to planning and the environment, property, rating, local government and administrative law.

Lord Carnwath is Honorary President of the UK Environmental Law Association, and of the Planning and Environmental Bar Association. He has also taken an active role in promoting knowledge of environment law worldwide (working with organisations such as UN Environment and the Asian Development Bank), and has participated in numerous judicial conferences in different parts of the world. In 2005 he was joint founder, and first Secretary-General, of the EU Forum of Judges for the Environment (EUFJE).  In 2015 he organised and co-hosted (jointly with Kings College London, and the Foreign Office) a conference in London on Climate Change and the Law. He has also taken an active interest in the law in other Commonwealth jurisdictions, and has spoken at conferences of the Commonwealth Magistrates and Judges Association and the Commonwealth Law Association.

He is an Honorary Professor of Law of University College London, and an Honorary Fellow of Trinity College, Cambridge. Outside the law, he is a keen amateur musician. He is a former Governor of the Royal Academy of Music (Hon FRAM) and former Chairman of the Britten-Pears Foundation.

Register for the webinar