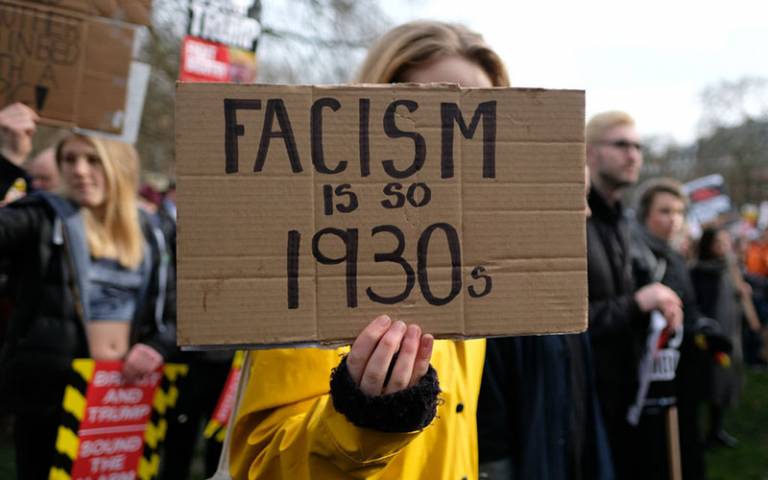 Abstract:
Fascist politics seeks to divide a population along ethnic, racial, or religious lines. Jason Stanley understood this as a scholar of philosophy and propaganda and as the child of refugees of WWII Europe, but even he was surprised by its prevalence in the United States. First with the rise of the birther movement and later the ascent of Donald Trump, he observed that not only is the rise of fascist politics possible in America, but its roots have been here for more than a century. Drawing on history, philosophy, sociology, critical race theory, and examples from around the world from 19th-century America to 20th-century Germany (where Hitler was inspired by the Confederacy and Jim Crow South) to 21st-century India–Stanley identifies the ten pillars of fascist politics that leaders use to hold onto power by dividing populations into an us and a them: the mythic past, propaganda, anti-intellectualism, unreality, hierarchy, victimhood, law and order, sexual anxiety, appeals to the heartland, and a dismantling of public welfare and unity. He uncovers urgent patterns that are widespread today and pins down a creeping sense that fascist tendencies are on the rise. By recognizing them, he argues, readers might begin to resist their most harmful effects.

About the speaker
Jason Stanley is the Jacob Urowsky Professor of Philosophy at Yale University. Before coming to Yale in 2013, he was Distinguished Professor in the Department of Philosophy at Rutgers University. Stanley is the author of Know How; Languages in Context; Knowledge and Practical Interests, which won the 2007 American Philosophical Association book prize; and How Propaganda Works, which won the 2016 PROSE Award for Philosophy from the Association of American Publishers. His first book, Knowledge and Practical Interests, won the American Philosophical Association Book Prize, awarded to one philosopher every year, for 2005-6. He is a frequent contributor The New York Times, The Washington Post, The Boston Review, and The Chronicle of Higher Education, among other publications. Stanley lives in New Haven, Connecticut, with his family.