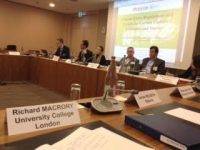 Experts from round the world attended the annual meeting of the CSS Regulatory Network held in Paris at the end of November. The meeting, the eighth in the series organized by the International Energy Agency, provided a forum for comparing regulatory and policy developments in carbon capture and storage.

Mainly for financial reasons, CCS has largely stalled in Europe, but this year’s meeting was marked by a strong presence from China, Indonesia, and Japan.

Professor Macrory chaired one of the international sessions sessions and was respondent on the session exploring liability issues. Another core participant was Ian Havercroft, formerly coordinator of the UCL Carbon Capture Legal Programme, and now based at the Global Carbon Capture Storage Institute in Australia where he is Global Lead – Legal and Regulatory.