The campus core network is based on Ten Gigabit Ethernet switching technology. This network derives from a strategic initiative begun in 1999 to provide additional central switching capacity and higher speed LAN connections.

The backbone architecture is based on two central 'core' switches sited at major College communications centres. Multiple 'edge' switches at other communication centres provide a choice of 1/10Gbps LAN connectivity to departments on the central campus and are in turn connected to both 'core' switches. This dual star topology provides both resilience (in the event of single link failure) and layer three load sharing capability in the backbone network. Inter-switch links utilise either 1 or 10 Gigabit Ethernet over private College fibre or leased lines.

The diagrams below display the UCL backbone network and the UCL extended network. They are for general information only and may not reflect the current topology. 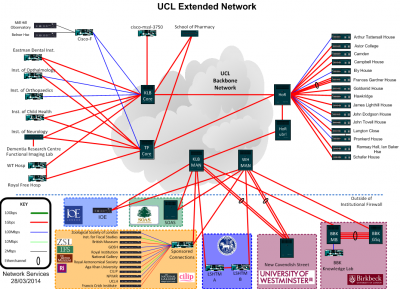