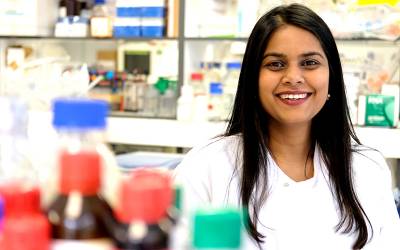 Mariya is a Clinician Scientist specialising in genetic eye diseases.  She achieved first-class honours for her BSc in Biochemistry and Molecular Genetics in 2000 from Imperial College London. She then graduated in Medicine and Surgery in 2003 from Imperial College London. In 2009 she completed her PhD in Molecular Ophthalmology from Imperial College London dissecting the molecular mechanisms involved in optic fissure morphogenesis and its defective closure leading to the human disorder known as ocular coloboma. In 2011, she was awarded a National Institute of Health Research (NIHR) Academic Clinical Lectureship at UCL Institute of Ophthalmology and completed her Ophthalmology specialist training in the North Thames London Deanery. During this period, Mariya was awarded over 25 prizes for her research into genetic eye diseases and established her research laboratory in this field. She became a fellow of the Royal College of Ophthalmologists (FRCOphth) in 2015. In 2017 Mariya was awarded a Wellcome Trust Clinical Research Career Development Fellowship to study the molecular mechanisms of ocular maldevelopment and received the Wellcome Beit Prize for one of the best fellowships of the cohort. She was appointed Honorary Consultant Ophthalmologist at Moorfields Eye Hospital and Great Ormond Street Hospital for Children where she has pioneered a tertiary referral genomic service for both children and adults with pan-ocular genetic eye disease. In 2019 Mariya was promoted to Associate Professor at UCL Institute of Ophthalmology. In 2020 she joined the Francis Crick Institute as the group leader of ocular genomics and therapeutics, where she continues her work to advance our understanding of inherited sight loss conditions and to develop novel therapies. 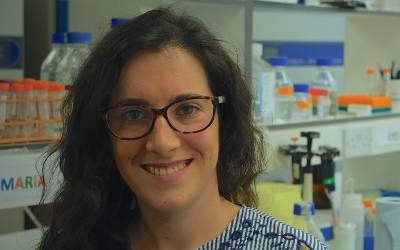 I received my BSc in Neuroscience and Biochemistry from the University of Western Australia in 2016. I completed my Honours project in the lab of Dr Fred Chen at the University of Western Australia in 2017, working on the differentiation of human-induced pluripotent stem cells (hiPSCs) to the retinal pigment epithelium. I am interested in the applications of stem cells in research, and this led me to begin my PhD in the Moosajee lab in June 2018. My project focuses on developing stem cell-based models of early eye development to model microphthalmia, a developmental eye disorder resulting in an underdeveloped eye and vision loss. I am aiming to discover genetic modifiers through transcriptomic analysis of affected and unaffected individuals in multigenerational families. This will help us to understand why different family members of affected by the same disease but to varying severities. 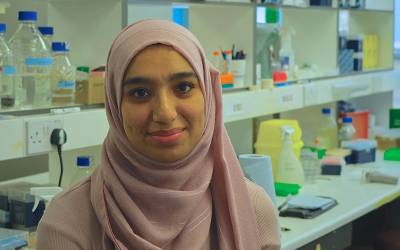 I have an undergraduate degree in Biochemistry from Queen Mary University and an MRes in Biomedical Research from Imperial College London, where I studied enzyme-inhibitor binding kinetics. I started my PhD in the Moosajee lab in 2018, studying the disease mechanisms of RDH12-related retinopathies. Mutations in the RDH12 gene are associated with Leber congenital amaurosis, a severe early-onset autosomal recessive retinal dystrophy, and autosomal dominant retinitis pigmentosa, a milder late-onset retinal dystrophy. RDH12 functions as part of the visual cycle, a series of enzymatic reactions that convert light to nerve signals. However, the exact role of RDH12 is not yet fully understood. My project involves creating a 3D retinal organoid using stem cells derived from patients' skin and generating an rdh12 zebrafish disease model. Both models will be used to study the function of RDH12, disease mechanisms and develop new therapies. 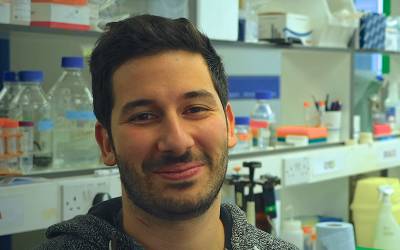 I completed a PharmD degree with an MRes in Pharmacology at the University of Paris-Saclay. Following a placement at the Vision Institute in Paris working on optogenetic therapies for inherited eye diseases, I started a PhD project in Mariya Moosajee’s Lab. My project is focused on developing a non-viral gene therapy for USH2A-related diseases. USH2A is a very large gene, which is the main cause of Usher Syndrome and non-syndromic Retinitis Pigmentosa. Usher syndrome is an autosomal recessive disorder impairing both audio-vestibular and visual systems. Since USH2A exceeds the carrying capacity of usual viral vectors, the development of non-viral approaches is therefore desirable. Our lab, in collaboration with Dr Richard Harbottle DNA vector lab (DKFZ, Heidelberg), tailored a non-viral plasmid vector system accommodating USH2A transcript and a human scaffold/matrix attachment (S/MAR) allowing episomal maintenance, mitotic stability and protection against epigenetic silencing. These plasmid vectors will be assessed in patient-derived cell models and USH2A-zebrafish models developed and characterized in the team by Dr Maria Toms. 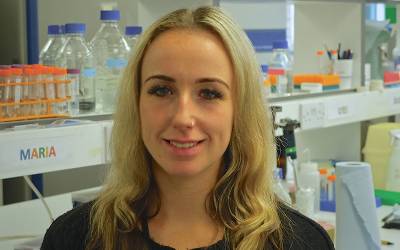 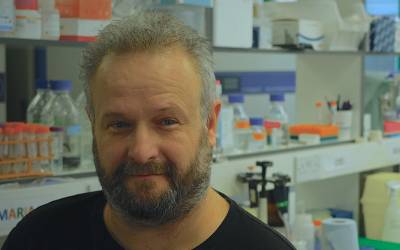 After graduating in Genetics at Queen Mary University, I did my D.Phil with Dame Professor Kay Davies at the University of Oxford, on motor neuron disease (specifically Spinal Muscular Atrophy). This involved developing model systems using altered splicing of RNA and elucidating how such modulation can be used to treat disease. Splicing is a key process in the cell that is carried out by the spliceosome, a large RNA-protein complex. Defects in splicing pathways have been shown to cause or play a major role in disease processes, including eye diseases. I continued my postdoctoral studies developing a novel RNA therapeutic approach at the University of Leicester with Professor Ian Eperon. Expanding my interests in RNA therapeutics, I worked with Professor Andrew Webster at UCL/Moorfields Eye Hospital, focusing on identifying RNA expression changes in specific forms of Retinitis pigmentosa. Numerous computation tools are involved in investigating changes at the RNA level; in collaboration with Vincent Plagnol and Professor Pete Coffey, we set out to develop data analysis pipelines alongside stem cell models of RP.
I joined Mariya Moosajee's group to carry out several central projects:  developing approaches for genome sequence analysis with a special interest in identifying genetic causes of microphthalmia, anophthalmia, and coloboma in patients within the Genomics England 100,000 genomes project, the use of a zebrafish model of Leber congenital amaurosis to assess transcriptome changes, investigation of changes in gene expression resulting in ocular coloboma, and further develop bioinformatic pipelines for next-generation sequencing data analysis.

I did my undergraduate degree in Biology at the University of Bath, including a placement working as a Research Assistant studying bird behaviour in Cape Verde. After finishing my degree, I worked for a year as a research assistant at the Wellcome Sanger Institute, working in high-throughput gene editing of stem cells, as well as the human cell atlas project. In 2018 I started my PhD project in the Moosajee Lab at UCL Institute of Ophthalmology.
My PhD project aims to understand the genetics of microphthalmia. In microphthalmia, there is a problem with how the eye develops during pregnancy and one or both eyes are small and underdeveloped. Over 90 genes are known to be associated with microphthalmia in patients. To better understand how these genes impact eye development in patients with microphthalmia, we are taking skin cells from patients, transforming them into stem cells and using the pluripotent capacity of these stem cells to form organoid models of eye development in the lab. Using these models, we hope to better understand eye development, the roles of microphthalmia-associated genes and test potential drug treatments/therapies.

During my medical school, I worked as a Medical Student Research Assistant at Mansoura Experimental Research Centre (MERC, Egypt), where I worked on spinal cord injury in rats. After obtaining my MBBCh degree in 2016 from Mansoura Medical School, I joined the COOL Lab at Casey Eye Institute, Oregon Health and Science University (OHSU, USA) as a Research Fellow working on optical coherence tomography angiography in retinal diseases, as well as ocular response to physiologic stimuli. Since 2018 I have been working at UCL Institute of Ophthalmology / Moorfields Eye Hospital as a Clinical Research Fellow. I am running a clinical trial for deep phenotyping of inherited retinal diseases (IRDs) including Usher syndrome and choroideremia. In this study we are following patients for a 1-year period, performing a wide range of multimodal imaging and functional ophthalmic testing to provide an in-depth characterization of disease progression and explore potential structure-function correlations.

I obtained my MBChB medical degree from the University of Dundee in 2013. I then completed my foundation training in the Scotland (East) deanery with rotations in various specialties, including a rotation in ophthalmology. In 2016, I started my ophthalmology training in Northern Ireland, based primarily in the Royal Victoria Hospital, Belfast. I am currently an ST5 registrar but have taken a year out to join Miss Moosajee’s team in August 2019 as a clinical research fellow.
My project focuses on developing a website that serves as a comprehensive guide of genetic eye disorders for patients, relatives and ophthalmologists. Our aim for this website is to provide patients with easy access to information about their conditions, inform them about current ongoing research and the type of genetic services they should be able to access. We also hope that it can increase the awareness of available genetic services among ophthalmologists so that patients are able to receive the appropriate prognoses and counselling for their conditions.

As an undergraduate student, I studied at Iona College in New Rochelle (NY, USA), where I received my BSc in Biochemistry (Hons). During my studies, I was able to work for two years on research projects in plant genetics. My love for genetics led me to pursue a Master’s degree in Genetics of Human Disease at University College London (UCL). Ever since I have been very fortunate to study and work in different departments at UCL conducting research on projects ranging from neurological disorders such as Ataxia to the tissue engineering of the human thymus. It has been a fantastic journey and I am currently enjoying my research at the Moosajee Lab developing alternative gene therapy for a range of inherited retinal diseases (IRDs). IRDs involve disorders such as Leber Congenital Amaurosis, Retinitis Pigmentosa, and Choroideremia. The focus of my therapy is to support photoreceptors’ glucose metabolism by increasing the number of glucose transporters and glycolytic enzymes. This may provide a survival strategy for degenerating photoreceptors and halt or slow the disease. 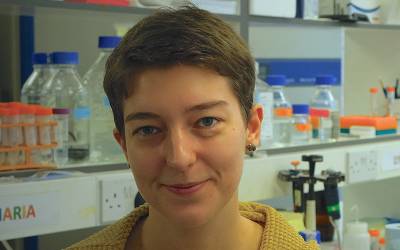 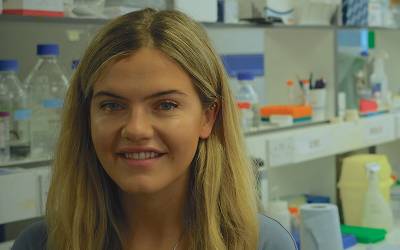 I have an MBChB medical degree from the University of Manchester. After graduating, I completed foundation training in London with an ophthalmology rotation at Moorfields at St Georges hospital. I then completed a masters at The London School of Hygiene and Tropical Medicine (LSHTM) and as part of this undertook research in Nepal on paediatric cataracts.  I was then employed by LSHTM as a research fellow working at the International Centre for Eye Health where I was part of a team coordinating a national eye survey in The Gambia. Since August 2019, I have been working as a clinical research fellow in Dr Moosajee’s team.
My research is looking at patients with juvenile cataract with a focus on a rare genetic disease called Cerebrotendinous xanthomatosis (CTX). This is a condition that is easily treated and may present early in life with juvenile cataract. However, most cases are only picked in adulthood when patients’ develop severe neurological dysfunction that leads to premature death. I am looking at whether we can expedite the diagnosis of patients with juvenile cataract and CTX by collecting data on their presenting features and co-morbidities. As well as this project I will be investigating genotype-phenotype correlations in juvenile cataract and exploring a link between autism and cataract. 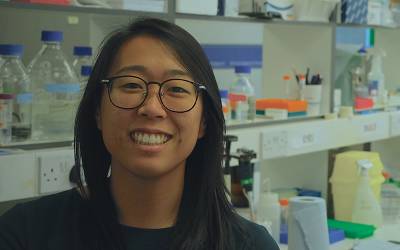 I have a BSc degree in biochemistry from Kings College London and an MBBS medical degree from Barts and the London School of Medicine and Dentistry. After graduating in 2014, I completed foundation programme training with rotations in medicine and surgery, including ophthalmology in London. In 2016 I began ophthalmology run-through training. Currently, I am an ophthalmology ST4 registrar in the North Thames (North London) Deanery, and since August 2019 I have taken an Out Of Programme Research (OOPR) year in order to take on the role as a clinical research fellow in Miss Moosajee’s team.
My research focuses on Aniridia.  Current projects include 1) Phenotyping all PAX6 positive aniridia patients at Moorfields Eye Hospital, and 2) Metabolomic studies on patients with PAX6 mutations. Our aim is to explore genotype-phenotype correlations in aniridia and to identify parameters for future clinical trials in aniridia.