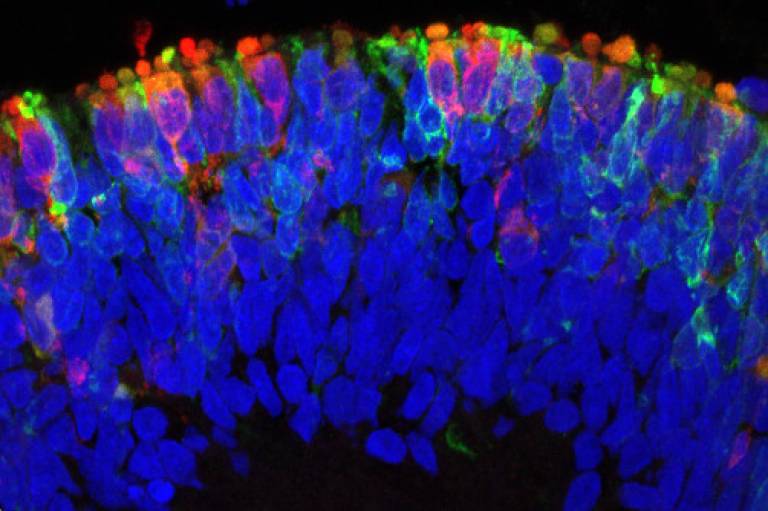 Scientists at the UCL Institute of Ophthalmology have identified the mechanism behind a common inherited cause of severe sight loss in young children. The results also point to a potential new treatment that may be possible to deliver by simple injection to the eye. The research was funded by Fight for Sight, Moorfields Eye Charity and Guide Dogs for the Blind.

Leber congenital amaurosis (LCA) is the name for a group of disorders that make up 5% of all inherited retinal dystrophies. These are conditions in which light-sensitive ‘photoreceptor’ cells in the layer of tissue at the back of the eye (the retina) degenerate and die, causing sight loss or blindness.

Up to 1 in 4 people with LCA have faults in the gene CEP290. Several syndromes, e.g. Senior-Loken syndrome, are linked to different faults in the same gene and can affect multiple parts of the body. But almost everyone with CEP290-LCA has a specific fault that only affects photoreceptors and, until now, we didn’t know why.

All of these conditions involve damage to sensors called cilia that stick out from the surface of most cells in the body like an antenna. They monitor the environment around them and can trigger a process of cell communication.

Cilia are vital for the body to work normally and research has shown that CEP290 protein is important for building them. But in CEP290-LCA the genetic fault leads to an unwanted instruction that tells the photoreceptor’s protein-making machinery to stop assembling CEP290 before it’s finished.

Photoreceptors have highly-specialised cilia made up of tightly-stacked discs (together called the ‘outer segment’). The discs are studded with molecules of protein called opsins that are pigments, meaning they absorb light.

When light hits an opsin it responds by changing shape. This sets off a chain of events in the photoreceptor that converts light into an electrical signal that can then be passed from eye to brain. Without an outer segment, photoreceptors are blind to light.

Previous reports have shown that skin cells (fibroblasts) from people with CEP290-LCA contain less than half the amount of full-length protein compared to healthy controls. But scientists have been unable to measure this in photoreceptors because it has not been possible to generate a CEP290-LCA animal model.

In this study, the research team, led by Professor Mike Cheetham at UCL Institute of Ophthalmology, was able to investigate the CEP290 fault in LCA retinal cells for the first time. They used induced pluripotent stem cells (iPSCs) generated from the skin cells of a patient with CEP290-LCA to grow 3D optic cups. The optic cup is a sheet of tissue that grows during eye development and goes on to become the layers of different cell types that make up the mature retina.

The team also tested a promising new way to treat CEP290-LCA using small engineered molecules known as antisense morpholinos. They have previously been shown in CEP290-LCA fibroblasts to prevent the premature stop instruction from being given, by changing which sections of the instructions are edited together (splicing). Here, the researchers designed an antisense morpholino, CEP290-MO, to target the LCA genetic fault.

Dr Amelia Lane is a research associate at UCL Institute of Ophthalmology and a first author on the study, which is published in the journal Cell Stem Cell. She says:

““We have been able to show that this CEP290-specific treatment restores normal splicing, increases protein and restores cilia numbers, structure and function in CEP290-LCA optic cups. This is really encouraging because it’s the functional interaction between photoreceptor proteins that will be critical to whether the treatment can restore vision. CEP290 is not suitable for most current approaches to gene therapy but a recent study in normal mice showed that eye injection with the same class of molecule as CEP290-MO altered photoreceptor splicing and was relatively safe, so this could become a practical therapeutic option.”

Mike Cheetham is Professor of Molecular and Cell Biology at UCL Institute of Ophthalmology. He says:

““Our findings using stem cells grown into organoids in the lab provide direct evidence of tissue-specific differences how genes are used by cells that are likely to contribute to the relationship between genetic inheritance and the manifestation of symptoms that affect patients. It has been suggested that photoreceptors are more vulnerable to the CEP290-LCA fault than other cell types, but our results suggest instead that photoreceptors produce significantly less CEP290 than other cells. We think this may also apply to other genes but, importantly, we now have the means to correct this and this understanding was only possible with stem cells derived from patients.”

Dr Dolores M Conroy is Director of Research at Fight for Sight. She says:

““Developing a treatment that could restore vision or slow slight loss is the top priority for research on inherited eye disorders as identified by patients, relatives, carers and health professionals in the Sight Loss and Vision Priority Setting Partnership and so these results are highly relevant as well as promising. However, we now need to translate these findings, using antisense therapy, into patients. In addition, this approach could be used to treat other inherited retinal disorders.”