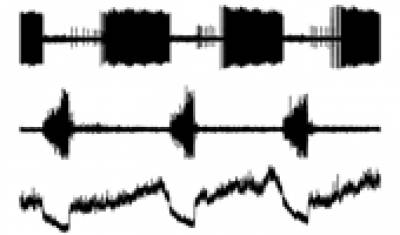 My core interest for many years has been the study of the control of muscles involved in respiratory movements. Because this motor act persists in experimental animals under anaesthesia, including under neuromuscular blockade, we can study the behaviour, connections and morphology of functionally defined neurones. The neurones of interest are the motoneurones and interneurones of the thoracic spinal cord and their antecedent neurones in the pathway conveying the respiratory drive from the medulla, the respiratory bulbospinal neurones. As for most neurones in motor systems, all of these neurones are multifunctional, but the stereotyped repetitive pattern of activity during respiration allows the assignment of specific roles to individual neurones during that particular motor act. The measurement of connections between individual neurones by spike-triggered averaging and cross-correlation are important experimental techniques for this. The development of these techniques and their interpretation has been a central theme in the work of the laboratory. For characterizing the interneurones we have more recently used morphological methods, including immunocytochemistry in conjunction with intracellular labelling.
It has always been the intention that such investigations should yield results that are useful in the understanding of clinical conditions, including spinal cord injury (for instance Kirkwood et al. 1984, J.Physiol. 350 : 225-251). In more recent years the direction of research has shifted more firmly in the direction of spinal cord injury and repair. One important reason for this was the results from several laboratories around the world, where success at achieving regeneration of nerve fibres across experimental lesions of the spinal cord has been achieved. In the 1980s this was only a distant prospect. When it became a reality it also became clear that good neurophysiology was a necessary, but largely missing element in the studies performed. Another reason was the realisation that the same factors which made the respiratory system a useful one for motor control studies made it equally valuable as an experimental system for developing techniques for spinal cord repair. In current work we are therefore investigating neural connections in the thoracic spinal cord, their plasticity and, hopefully, their regeneration in the situation of experimental spinal cord injury.

MRC (we are part of the MRC Co-operative Group 'Neural Control of Movement', and have one MRC studentship).

We are also part of the Institute of Sensorimotor Neuroscience.