Self-awareness is often held up as a crowning achievement of the human mind. But it remains unclear what it is about the brain that gives it this weird and wonderful ability to think about itself – what psychologists refer to as “meta” cognition. In my talk I will reveal how we can measure metacognition in the lab, ask whether it’s really uniquely human, and explore whether it's possible to build a metacognitive machine.

Stem cells getting on your nerves? Patani Lab

Find out how stem cells are being used to build the human nervous system in a dish and answer the crucial questions in neurodegenerative disease.

Team FTD (frontotemporal dementia) from the Dementia Research Centre at Queen Square Institute of Neurology hosted an event for the second year running at international science festival Pint of Science. Mica Clarke, a PhD student at the institute, was the event organiser and coordinated the sold-out event. This year the team, led by Dr Jonathan Rohrer, wanted to focus on a different aspect of cognitive change in FTD, language. The event was called Speechless, held again at The Water Rats pub on Grays Inn Road.

Our ability to express ourselves and understand others is central to our day-to-day lives. In FTD that ability can be lost slowly over time whilst memory and other parts of thinking remain unaffected. Dr Jonathan Rohrer spoke about the development of language and how we lose it, Rhian Convery (research assistant) discussed the different types of language loss we see in FTD, and Mollie Neason (research assistant) used neuroimaging findings to explore the loss of brain cells in FTD in areas important for language. 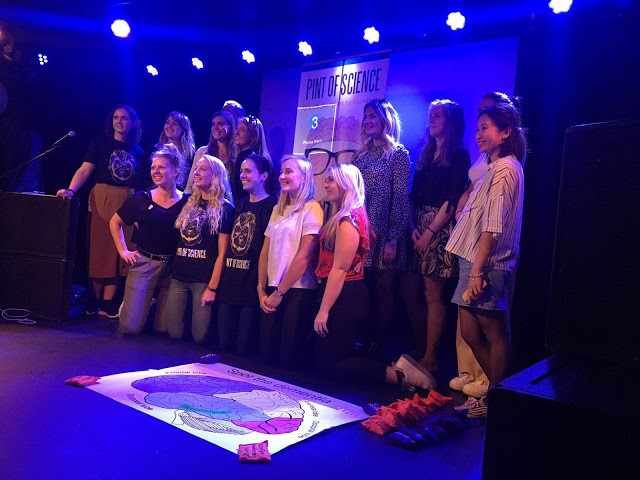 The event was a huge success – tickets sold out in 4 days and 60 members of the public came to learn about language loss in FTD. In between talks there were a number of activities for the audience to get involved with, and a competitive quiz to finish demonstrated how much the audience learned throughout the evening! Pint of Science is a fantastic initiative offering a great platform for scientists to share their research with the public, and team FTD hope to continue their annual contribution to the festival. 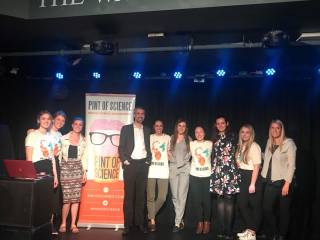 Pint of Science is an international science festival that takes place every May in cities around the world. Team FTD (frontotemporal dementia) at the Dementia Research Centre, led by Dr Jonathan Rohrer, put on their own event during this year’s festival: The ‘self’ and frontotemporal dementia.

Mica Clarke, a PhD student at the Institute of Neurology, was the event organiser and coordinated the sold-out event. The team spent an evening at a pub on Grays Inn Road, London, talking to 60 members of the public about FTD and how this group of diseases affects various aspects of cognition, including language, problem solving and social cognition - how we interact with those around us. The concept of the self fades with disease progression and many aspects of one’s own personality are lost, and three members of the team gave talks discussing what contributes to this. Dr Jonathan Rohrer spoke about what contributes to the concept of the self, Lucy Russell (PhD student) discussed what social cognition is and how we can measure it, and Mica Clarke discussed what causes the concept of the self to change by exploring the loss of brain cells and connectivity in the brain in FTD. Other members of the team ran interactive activities for the audience to get involved with including tracking eye movements using an iPad and guessing games to test the audience!

It was a great event with fantastic feedback, and the team look forward to hosting another evening at next year’s festival focusing on other changes seen in FTD.