A blood test could screen children for juvenile-onset Huntington’s disease, reports a new study led by UCL Queen Square Institute of Neurology, ahead of a larger trial of an at-home finger prick test for the condition. 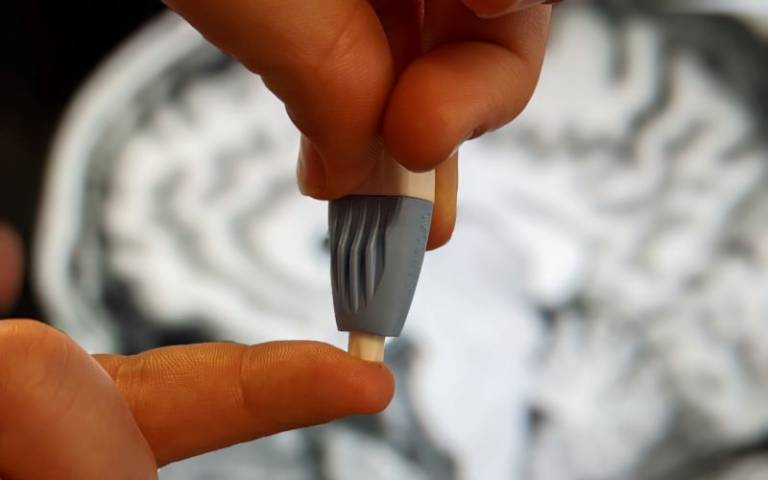 The new trial will be the largest ever study of juvenile-onset Huntington’s disease (JoHD), supported by a new £1.6 million grant from the Medical Research Council, their largest ever grant for JoHD research.

Dr Lauren Byrne (UCL Huntington’s Disease Centre, UCL Queen Square Institute of Neurology), lead author of the recent study and recipient of the grant has been awarded the money to advance therapeutic development for JoHD with an at-home blood test.

This is the largest single research award ever dedicated to JoHD and comes as Dr Byrne and colleagues published a breakthrough article in Movement Disorders reporting how a blood test could transform the care of young people with JoHD.

JoHD is an ultrarare and aggressive form of Huntington’s disease (HD) where symptoms develop before the age of 21 and progress more rapidly than adult-onset HD.

There is a heavy burden on the families of children and young people with JoHD. It can often take children years to get a diagnosis of JoHD, as the symptoms can take many forms and doctors are often reluctant to undertake genetic testing for HD in a minor. This, combined with the rarity of the condition, makes it extremely difficult for JoHD patients to take part in research, resulting in very little being known about the disease and how best to care for these very sick young people.

Currently, despite substantial recent progress towards effective treatments for adult-onset HD, children diagnosed with JoHD are not being included in clinical trials.

In a study just published in the journal Movement Disorders, Dr Byrne has shown that a blood test measuring a protein called Neurofilament light (NfL) has potential as a biomarker for JoHD. Blood NfL is an important biomarker for many brain diseases as it is increased when brain cells are damaged. The paper reports that NfL levels in blood are much higher in children with JoHD, suggesting that the blood test could be used as an initial screening tool in children with symptoms suggestive of JoHD, to decide whether to proceed to genetic testing. It could also be used to help run clinical trials in JoHD by giving an early indication of whether a new drug is slowing the disease.

With her new MRC-funded project, INfLUENCE:HD, Dr Byrne aims to improve the standards of care for the children and young adults living with this devastating condition. She has developed a way to perform the NfL blood test at-home using finger-prick blood collection. This will allow her to recruit over 100 JoHD patients globally and study them over time, making it the largest study of JoHD patients to date.

Dr Byrne will begin the INfLUENCE:HD study at UCL Huntington’s Disease Centre at Queen Square Institute of Neurology in 2022, to validate her novel method for the at-home NfL blood test. The work will increase our understanding of JoHD progression, advance the design of clinical trials for JoHD patients and help doctors diagnose and care for children with JoHD.

Dr Byrne, who is Senior Research fellow at the UCL Huntington’s Disease Centre, said: “At-home blood testing has already begun to transform patient care – for instance in the field of sexual health. A home blood test for markers of neurodegeneration could be transformative for many neurological diseases, but I am particularly proud to be able to focus this work into JoHD.”

Chief Executive of the Huntington’s Disease Association, England and Wales, Cath Stanley said, “As the main HD charity in England and Wales supporting families impacted by Juvenile-onset HD, we see how truly little there is for them. The MRC awarding Dr Byrne with the largest research grant ever devoted to JoHD research will mean so much to these families and will make a huge difference to advance therapeutic development for this forgotten population.”