Identification of SCA3 biomarkers: an interview with Dr Hector Garcia-Moreno 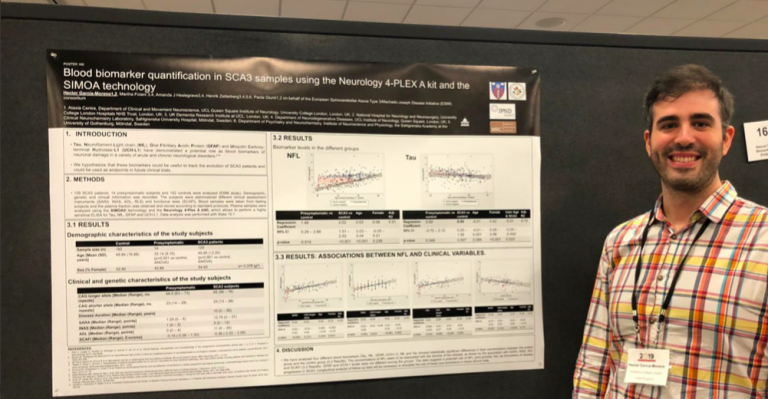 Identifying biomarkers for SCA3 is one of the aims of the ESMI project (European Spinocerebellar ataxia type 3/Machado-Joseph disease Initiative), in which Dr Garcia-Moreno is involved. The ESMI Project is a SCA3 research initiative involving researchers from five countries. In the UK, the ESMI project has been funded by the Medical Research Council (MRC, grant number MR/N028767) and CureSCA3.

Here, Dr Garcia-Moreno  is interviewed about this work, published in the European Journal of Neurology.

Dr Julie Greenfield, Ataxia UK’s Head of Research, is on the ESMI Executive Board as a Euro-ataxia representative. The London Ataxia Centre at the National Hospital for Neurology and Neurosurgery (University College London Hospitals NHS Foundation Trust) is the UK site for this study, and is recruiting participants. Prof Paola Giunti is the leader of the project in the UK. If you have SCA3 and are interested in being involved in this study, you can contact the research team at uclh.ataxia@nhs.net.

In this study, the researchers measured a number of different proteins in the blood and cerebrospinal fluid (CSF, the liquid surrounding the brain and the spinal cord) of people with SCA3, people without SCA3 (called controls), and people that have the gene that causes SCA3 but do not yet have the symptoms of ataxia (called preataxic carriers). The aim was to find a protein which varies in amount as SCA3 progresses – called a biomarker. This is relevant for clinical trial design.

Question 1. What is your role at the London Ataxia Centre?
I started my work as a Clinical Research Fellow at the Ataxia Centre in September 2016. Since then, I have combined my clinical practice in the Ataxia Clinic with research activities and my PhD studies. I have been mainly involved in the coordination and execution of natural history and biomarkers studies for various types of genetic ataxias. I have collaborated in the data collection in studies such as EFACTS (for patients with Friedreich’s ataxia) and EUROSCA (for patients with spinocerebellar ataxias), among others. In addition, I have been the leading clinician for the ESMI study. My main research focus is genetic forms of ataxia, especially spinocerebellar ataxias like SCA3.

Question 2. How were people with SCA3 involved in this study?
In our centre, patient involvement in the design and conduction of research studies is fundamental. Patient associations were involved in the design of the project, and provided part of the funding. People with SCA3 attended our centre annually to undergo the different assessments included in the study. Some of them volunteered to have bloods and CSF taken, and also had two brain magnetic resonance imaging scans (MRI). We are aware of the time and effort made by participants to take part in research, and we are really grateful for this.

Question 3. What were the key findings of your paper?
Firstly, we have found that a protein called tau could be elevated in blood and CSF of people with SCA3 in early stages of the condition, and this would decrease later on. Tau is a well-known protein in other neurological conditions, but there is very little information on its role in spinocerebellar ataxias. Our findings are very interesting, since they raise the question whether tau could be used as a marker of early stages in SCA3, the reasons for such an elevation, and the contribution of this to the symptoms of SCA3.

In addition, we have confirmed findings by other researchers about a different protein called neurofilament light-chain (NfL). We measured NfL using a novel test (called “4-Plex”). With this test, we can measure NfL together with three other proteins (including tau). There have been some studies measuring NfL in isolation or together with another protein (called “singleplex” and “duplex”, respectively). These studies have shown that NfL could be potentially used as a biomarker in SCA3. This is the first time that the “4-Plex” test has been used to measure these proteins in SCA3, and we showed similar results to other studies using different tests. Importantly, using the “4-Plex” test allowed us to simultaneously study tau levels, and obtain the above results which highlighted the possibility of using tau as a  marker of early-stage SCA3.

Question 4. What are biomarkers, and why are they important for SCA3?
Biomarkers are any characteristics that we can measure in a person, and that can give us certain information about normal health processes, a disease, or even the response to medications or some environmental exposures. I always mention the following example to the participants of my research. If we wanted to test a new drug for hypertension (high blood pressure), the biomarker we would use is the person’s blood pressure. We can measure this before and after administering the drug to the person, so that we can get an idea about the action of the drug.

Biomarkers are useful in multiple ways in medicine. Probably, one of their most relevant roles is when they can inform on the progression of a condition. If a biomarker is able to achieve this aim, it can be used in a clinical trial as an outcome measure. An outcome measure is the main measurement that will allow the researchers to conclude if a new medication has some effect or not in a condition. In SCA3, as in many forms of genetic ataxias, we lack good biomarkers. In addition, we have not been able to find a curative treatment for SCA3 yet. For these two reasons, biomarkers are relevant for people with SCA3 and for the wider ataxia community.

Question 5. What is the significance of this research for people with SCA3?
Our research suggests that tau could be elevated in early phases of SCA3. If confirmed, tau could be potentially used to select early-stage participants for a clinical trial, for instance. In the case of NfL, we showed consistency with other studies, and this means that it is possible that NfL measurements could be included as outcome measures in future clinical trials.

Question 6. What are the next steps for this research?
The data in our study has been produced with the results of the first visits of the participants. We will next analyse the data of all the participants’ visits together, to see if we can observe changes over time. This will help us to decide how useful these biomarkers can be if used in future clinical trials.

We would like to increase our number of participants, as well as the number of blood and cerebrospinal fluid samples. These samples are valuable material for research studies that can support the design of future clinical trials.