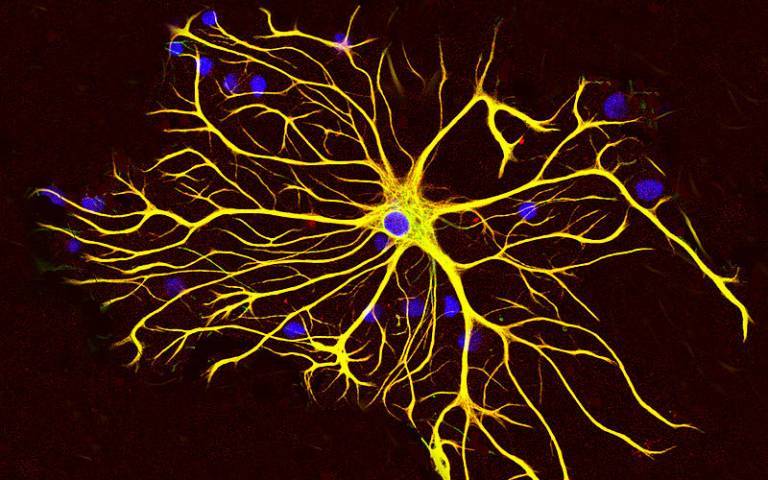 The two new publications, in Brain and Genome Research, suggests that the star-shaped astrocytes may be a key target for new ALS treatments.

ALS, also known as motor neuron disease, is a rapidly progressing degenerative disease of the nervous system, meaning patients suffer loss of strength, speech and eventually the ability to breathe. There are currently no effective treatments and tragically most people die within three to five years.

When healthy, astrocytes help protect and nurture surrounding motor neurons. However, while recent findings from ALS patients have indicated astrocytes may contribute to the disease, how they go about this remains unclear.

In the first paper, published in Genome Research (in December), the researchers analysed all existing public datasets of astrocytes in ALS, spanning both human and mouse models. Using this meta-analysis approach, they found that in ALS, astrocytes become pro-inflammatory, which is toxic to neighbouring motor neurons.

ALS astrocytes were also found to lose important protective functions, notably the ability to uptake a substance called glutamate. This leads to a build-up of glutamate, which damages motor neurons.

First author Dr Oliver Ziff (UCL Queen Square Institute of Neurology and Francis Crick Institute) said: “Our work suggests that treatments for ALS will need to reduce or reverse these damaging changes in astrocytes. These cells are not just innocent bystanders but actively contribute to the progression of the disease.”

As part of their study, the team examined the impact of different mutations known to cause ALS on astrocytes. They observed that in the absence of any neighbouring immune cells, such as microglia, the presence of these mutations alone was sufficient to drive harmful changes in the astrocytes.

The nature of these changes depended on the specific mutations present, suggesting that astrocytes in ALS can appear diverse between different patients. The researchers observed key molecular and functional differences in the cells as a result of the mutation they carried.

However, they also showed that some of these changes converge, which might explain why, in disease, astrocytes have similar characteristics, failing to protect motor neurons from degeneration and increasing inflammation that in turn drives disease.

PhD student Doaa Taha (UCL Queen Square Institute of Neurology and Francis Crick Institute), co-lead author on the first paper, said: “The nature and diversity of astrocyte transformation between ALS mutations was not well known. The insight we’ve gained into the different ways this change manifests in early disease could be a helpful starting point in efforts to reverse the cell transformation.”

Dr Ben Clarke (UCL Queen Square Institute of Neurology and Francis Crick Institute), co-lead author on both papers, said: “We’re now working to understand the biology of the distinct molecular patterns we’re observing and how they converge. Understanding the early astrocyte changes in ALS could provide us with new therapeutic targets.”

While much research into ALS relies on post-mortem samples, where the disease is already well-established, these studies involve growing living cells derived from patients. Master stem cells can be taught to differentiate into any cell from anywhere in the human body, meaning scientists can observe the very earliest cell changes caused by different genetic mutations. The Patani Lab at the Francis Crick Institute are leaders in growing astrocytes and other cells of the nervous system from human induced pluripotent stem cells.

Professor Rickie Patani, head of the Crick’s Human Stem Cells and Neurodegeneration Laboratory, Consultant Neurologist at the National Hospital for Neurology and Neurosurgery and member of the UCL Queen Square Motor Neuron Disease Centre, said: “Our growing understanding of early disease biology is bringing us closer to finding new ways to treat ALS. It’s at the origin of these ‘star’ cells that we might uncover crucial changes that drive the disease.”