Neurologists at UCL Queen Square Institute of Neurology & National Hospital for Neurology & Neurosurgery (UCLH) have published the first clinical observations of patients who experienced an ischaemic stroke, the most common form of stroke, following an Oxford AstraZeneca vaccine. 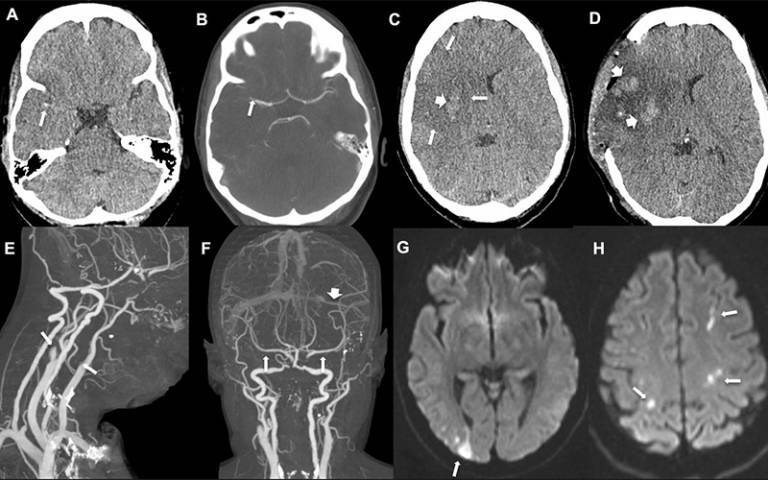 In the research letter, clinician scientists at UCL Queen Square Institute of Neurology and the National Hospital for Neurology and Neurosurgery (part of UCLH), advise that when patients present with ischaemic stroke – due to blood clots in arteries causing lack of blood supply to part of the brain – within about one month of vaccination, they should also be ‘urgently evaluated’ for the very rare syndrome of Vaccine induced Thrombosis and Thrombocytopenia (VITT).

The condition requires different additional treatments from typical ischaemic stroke, so needs to be rapidly diagnosed and managed by a multi-disciplinary team with rapid access to a range of drugs.

In the UK there are over 100,000 cases of ischaemic stroke per year (on average). By contrast, up to 12 May 2021 there were only 309 cases of major thrombosis with low platelet count suggesting VITT following over 30 million doses of the AstraZeneca vaccine. The number of people who experienced blood clots from VITT after a COVID-19 vaccine is therefore extremely low at around 1 per 100,000 doses.

The report, published in Journal of Neurology Neurosurgery & Psychiatry, also details the symptoms of three patients leading up to their ischaemic stroke and admission to the NHNN.

Lead author, Professor David Werring, Professor of Clinical Neurology at UCL Queen Square Institute of Neurology and a Consultant Neurologist at the NHNN, said: “Although cerebral venous thrombosis – an uncommon stroke type in clinical practice – is now recognised as being the most frequent presentation of VITT, our study shows that the much more common ischaemic stroke (due to arterial thrombosis blocking blood flow to part of the brain) may also be a presenting feature of vaccine-induced thrombosis. Of course, both types of thrombosis remain extremely rare, but doctors need to be vigilant if patients present with typical stroke symptoms (e.g. face, arm or leg weakness, or impaired speech) due to a blocked artery any time between days 4 and 28 post vaccination.”

In previously published studies (Scully et al*), VITT has been reported in a larger group of patients following an Oxford–AstraZeneca vaccine. In these cases most blood clots affected cerebral venous sinuses, reducing the drainage of blood from the brain, typically causing severe headache, sometimes with stroke symptoms.

Additionally, these patients had other key features, namely low platelet counts (thrombocytopaenia) and the presence of PF4 (platelet factor 4) antibodies – proteins that help form clots – that have helped define the VITT syndrome.

Professor Werring added: “Patients presenting with ischaemic stroke after receiving the Oxford-AstraZeneca vaccine should urgently be evaluated for VITT with laboratory tests for platelet count, D-dimers (a protein fragment in the blood associated with increased blood clotting), fibrinogen and anti-PF4 antibodies.

The first patient, a woman in her 30s, experienced an intermittent headache on her right side and around her eyes six days after the vaccine. Five days later she awoke feeling drowsy and with weakness to her left face, arm and leg. Imaging revealed a blocked right middle cerebral artery with brain infarction, and blood clots in the right portal vein thrombosis. She underwent brain surgery to reduce the pressure in her skull, plasma removal and replacement, and received the anti-clotting drug fondaparinux, but unfortunately died.

The second patient, a woman in her late 30s, presented with headache, confusion, weakness in her left arm and loss of vision on her left side 12 days after having received the vaccine. Imaging showed blockages in several vessels including both carotid arteries (the main blood supply to the hemispheres of the brain), arteries supplying the heart and lungs (pulmonary embolism) and the left transverse sinus (one of the cerebral venous sinuses). Her platelet count increased following plasma removal and replacement and intravenous corticosteroids. She was then given fondaparinux and improved.

The third patient, a man in his early 40s, presented three weeks after receiving his vaccination with problems speaking and understanding language (dysphasia). Imaging showed a clot in the left middle cerebral artery, but there was no evidence of clots in the cerebral venous sinuses. He received a platelet transfusion, intravenous immunoglobulins, and fondaparinux, and remains stable.

In all cases, the ischaemic stroke was associated with blockages of large arteries (affecting the carotid or middle cerebral arteries) and two patients also had venous thrombosis involving the portal and cerebral venous system. All three also had extremely low platelet counts, confirmed anti-PF4 antibodies, and raised D-dimer levels – features associated with VIIT.

In a linked commentary, Professor Hugh Markus, from the Department of Clinical Neurosciences, at the University of Cambridge, writes: “This report emphasises that the immune mediated coagulopathy can also cause arterial thrombosis including ischaemic stroke, although venous thrombosis and especially cerebral venous sinus thrombosis appear more frequent.”

He adds: “During the current period of Covid vaccination a high index of suspicion is required to identify thrombotic episodes following vaccination. However, it is important to remember that these side-effects are rare, and much less common than both cerebral venous thrombosis and ischaemic stroke associated with Covid-19 infection itself.”