Simple vision tests can predict which people with Parkinson’s disease will develop cognitive impairment and possible dementia 18 months later, according to a new study by UCL Queen Square Institute of Neurology researchers. 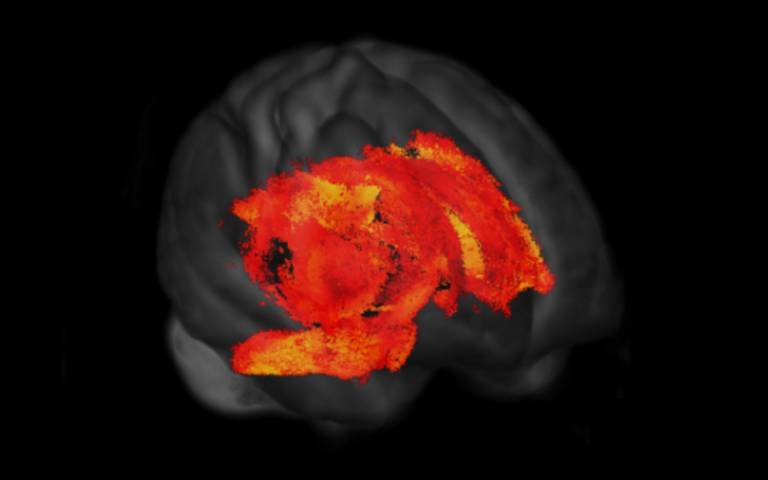 The study, published in Movement Disorders, adds to evidence that vision changes precede the cognitive decline that occurs in many, but not all, people with Parkinson’s.

In another new study published today in Communications Biology, the same research team found that structural and functional connections of brain regions become decoupled throughout the entire brain in people with Parkinson’s disease, particularly among people with vision problems.

The two studies together show how losses and changes to the brain’s wiring underlie the cognitive impairment experienced by many people with Parkinson’s disease.

Lead author Dr Angeliki Zarkali (Dementia Research Centre, UCL Queen Square Institute of Neurology) said: “We have found that people with Parkinson’s disease who have visual problems are more likely to get dementia, and that appears to be explained by underlying changes to their brain wiring.

“Vision tests might provide us with a window of opportunity to predict Parkinson’s dementia before it begins, which may help us find ways to stop the cognitive decline before it’s too late.”

For the Movement Disorders paper, published earlier this month, the researchers studied 77 people with Parkinson’s disease and found that simple vision tests predicted who would go on to get dementia after a year and a half.

Dementia is a common, debilitating aspect of Parkinson’s disease, estimated to affect roughly 50% of people within 10 years of a Parkinson’s diagnosis.

These longitudinal findings add weight to previous studies that were done at one time point, which had suggested that performance in vision tests, involving commonly used eye charts and skewed images of cats and dogs, was linked to the risk of cognitive decline.*

The new study also found that those who went on to develop Parkinson’s dementia had losses in the wiring of the brain, including in areas relating to vision and memory. The researchers used recently developed methods to analyse finely detailed MRI scans, enabling them to pick up the damage to the brain’s white matter.

The researchers identified white matter damage to some of the long-distance wiring connecting the front and back of the brain, which helps the brain to function as a cohesive whole network.

The Communications Biology study involved 88 people with Parkinson’s disease (33 of whom had visual dysfunction and were thus judged to have a high risk of dementia) and 30 healthy adults as a control group, whose brains were imaged using MRI scans.

In the healthy brain, there is a correlation between how strong the structural (physical) connections between two regions are, and how much those two regions are connected functionally. That coupling is not uniform across the brain, as there is some degree of decoupling in the healthy brain, particularly in areas involved in higher-order processing, which might provide the flexibility to enable abstract reasoning. Too much decoupling appears to be linked to poor outcomes.

The researchers found that people with Parkinson’s disease exhibited a higher degree of decoupling across the whole brain. Areas at the back of the brain, and less specialised areas, had the most decoupling in Parkinson’s patients.

Parkinson’s patients with visual dysfunction had more decoupling in some, but not all brain regions, particularly in memory-related regions in the temporal lobe.

The research team also found changes to the levels of some neurotransmitters (chemical messengers) in people at risk of cognitive decline, suggesting that receptors for those transmitters may be potential targets for new drug treatments for Parkinson’s dementia. Notably, while dopamine is known to be implicated in Parkinson’s, the researchers found that other neurotransmitters – acetylcholine, serotonin and noradrenaline – were particularly affected in people at risk of cognitive decline.

Dr Angeliki said: “The two papers together help us to understand what’s going on in the brains of people with Parkinson’s who experience cognitive decline, as it appears to be driven by a breakdown in the wiring that connects different brain regions.”

Dr Rimona Weil (UCL Queen Square Institute of Neurology), senior author of both papers, said: “Our findings could be valuable for clinical trials, by showing that vision tests can help us identify who we should be targeting for trials of new drugs that might be able to slow Parkinson’s. And ultimately if effective treatments are found, then these simple tests may help us identify who will benefit from which treatments.”

The researchers were supported by Alzheimer’s Research UK, Wellcome, and the National Institute for Health Research UCLH Biomedical Research Centre.