This event on 20th October 2021 was organised by the Department for Neurodegenerative Disease, who invited all UCL/UK DRI Staff and Students to join a thought-provoking conversation about intersectionality with special guest speaker Baroness Oona King of Bow 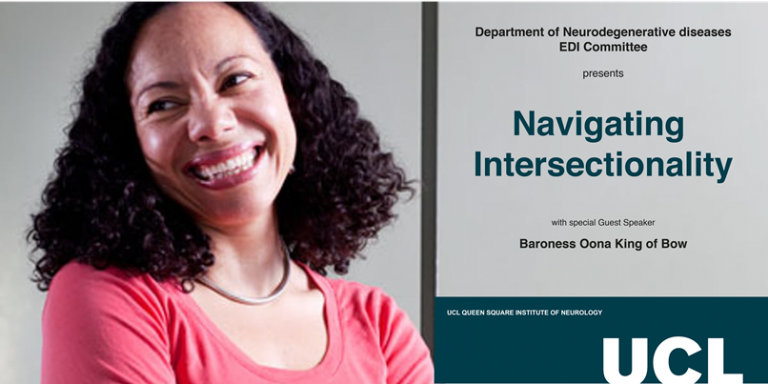 Baroness Oona King of Bow is a lead figure in Equality, Diversity, and Inclusion both in the United Kingdom and internationally. Baroness King is currently the Vice President of Diversity, Equity and Inclusion at Snap following previous roles as Google’s Director of Diversity Strategy, YouTube's Director of Diverse Marketing, and Chief Diversity Officer for Channel 4. She is a member of the House of Lords and former Senior Policy Advisor & speechwriter to Gordon Brown during his time as Prime Minister.

Baroness King was the 200th woman in history to be elected to UK parliament and the second black woman, representing Bethnal Green & Bow from 1997 to 2005. Baroness King was also the driving force behind the Equality Act 2010 and has introduced requirements for companies to publish gender pay gap figures and tools to monitor diversity.

On the 20th of October, Baroness Oona King and Professor Ed Wild joined in an amazing virtual fireside chat discussion. For one hour Baroness King took us on a journey, speaking of her experiences working to improve diversity and inclusion, breaking down barriers and promoting progressive and inclusive organisational cultures in technology, media and beyond.

This seminar was attended by over 190 guests from several departments across UCL and has received great feedback. The event was tailored as a conversation with an audience at all stages of their understanding and learning on matters of Equality, Diversity and Inclusion, exploring what intersectionality means in real-world situations, and how can we translate this awareness into our individual practices and organizational policies to improve our approach to inclusivity.