The MS-STAT2 team, led by Professor Jeremy Chataway at UCL Queen Square Institute of Neurology, are delighted to report that they have recruited over 200 patients to the trial at UCL (the lead site for MS-STAT2). 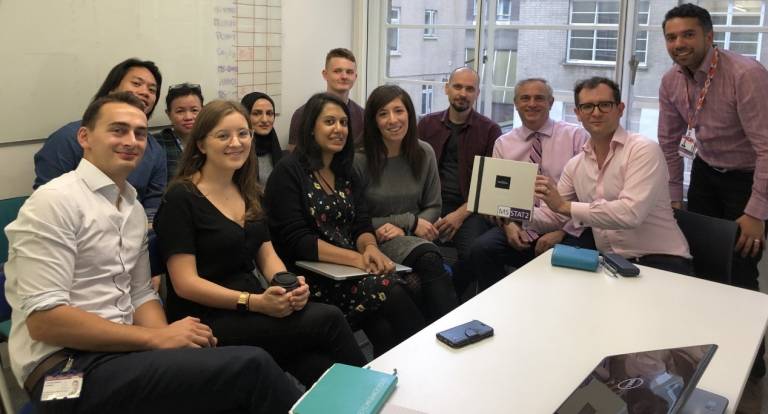 The MS-STAT2 goal is to recruit 1,000 patients so that they can test the effectiveness of repurposed simvastatin (80mg) in a phase 3 double blind, randomised, placebo controlled trial (1:1) in patients with secondary progressive MS (SPMS), to determine if the rate of disability progression can be slowed over a 3 year period.

Multiple Sclerosis (MS) is a progressive neurological disorder of the brain and spinal cord. It affects approximately 120,000 people in the UK and 2.5 million people globally. Most people with MS experience two stages of the disease: Early MS – Relapsing-Remitting MS (RRMS), which is partially reversible, and Late MS – Secondary Progressive MS (SPMS), which affects the majority of patients, usually after 10 to 15 years after diagnosis.

In an earlier study (MS-STAT1), 140 people with SPMS were randomly assigned to receive either placebo or simvastatin for a period of two years. The investigators found that the rate of brain atrophy (loss of neurons - ‘brain shrinkage’), as measured by magnetic resonance imaging (MRI), was reduced in patients receiving simvastatin compared to those taking placebo.
Several other long term studies have also reported that there might be a relationship between the rate of brain atrophy and the degree of impairment.

"There are no treatments currently licenced in the UK for Secondary Progressive Multiple Sclerosis. We aim to change this through the MS-STAT2 trial. There is a huge amount of teamwork that goes into this, with 30 sites actively recruiting around the country. Here at UCL, the lead site for MS-STAT2, we now have over 200 patients in the trial, and we are approaching a total of 650 around the country."

"Whilst this is great work and we are hugely grateful to all the patients giving up their time to take part, we want more! Our target is to reach ~1000 patients, so if any patients would like to take part, or if any healthcare professionals would like to refer someone, please get in touch!" Professor Jeremy Chataway, UCL Queen Square Institite of Neurology