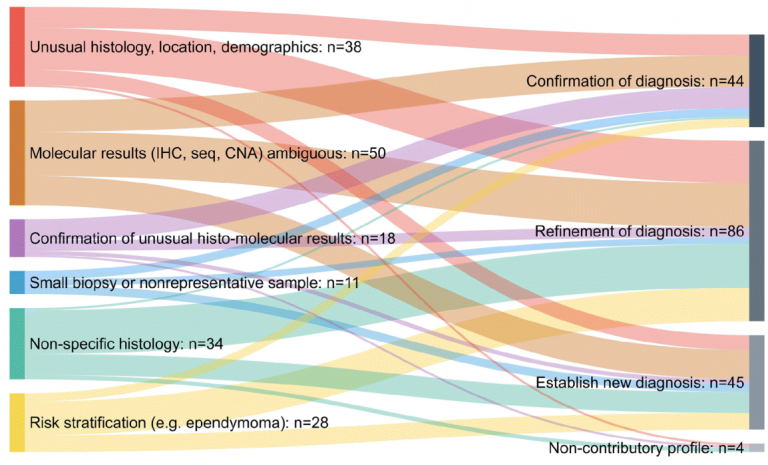 The study is based on the epigenetic analysis and classification of adult brain tumours. The study team had previously already contributed to the development of the brain tumour classifier in the German Cancer research Centre in Heidelberg.

This method is different from conventional molecular tests that detect genetic mutations in the DNA of tumour cells, in that it looks at small chemical changes on the DNA of tumour tissue. Such chemical changes also exist in normal tissue but these are different from the changes seen in normal tissue in the brain. The patterns of these changes have been used to establish groups of tumours based on this fingerprint on the DNA (also known as epigenetic changes). The "fingerprints" on individual tumours have been compared with a large group that was previously identified.

Sebastian Brandner, senior investigator on this study said: “this is a groundbreaking technology which has already led to significant improvements in the way we diagnose brain tumours. I am very pleased that this is possible within the NHS and that we are able to offer this as a service to all pathology departments in the UK”.

This study found out more about tumours that could not be sufficiently diagnosed even with detailed other molecular tests, or where patients had an unexpected clinical development. This way we wanted to understand better of what nature the tumours were. Eventually, this technique enables oncologists to tell patients more precisely about the risk of growth of their brain tumour. This can help making more informed and accurate therapy decisions. In the study, researchers found that this new technology changed one in four brain tumour diagnoses.Many patients treated at UCLH/NHNN have already benefitted from this novel technology.

Zane Jaunmuktane, the lead investigator said: “These methylation arrays are now essential diagnostic tools in our department and for complex referral cases. It would be impossible to perform modern brain tumour diagnostics without this technology”.

This figure shows on the left the reason why we tested tumours. Most commonly, these tumours were difficult to diagnose by conventional pathology and molecular biology methods. On the right, the outcome of the test with methylation arrays is shown, with one in four diagnosis changed, and half of the diagnosis improved