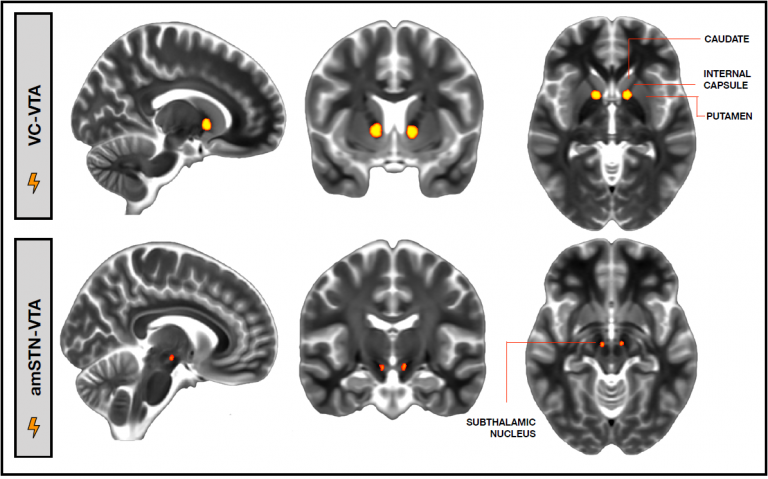 Obsessive compulsive disorder (OCD) can often be resolved with behavioural therapy and medication, but there remains a subgroup of patients who do not respond to these conventional treatments and remain severely impaired. Another treatment option for this group of treatment-refractory OCD patients is neurosurgical ablation, and more recently deep brain stimulation was suggested as a reversible and adjustable alternative for ablation. Researchers and neurosurgeons at the UCLH Functional Neurosurgery Unit piloted a randomized clinical trial to establish which brain region is the optimal location for stimulation for improving OCD and to understand the neural mechanisms underlying the effects of DBS on OCD symptoms. Six patients who were experiencing OCD for more than 20 years participated in this trial. Patients underwent neurosurgery to implant DBS electrodes in two locations of interest:  the ventral capsule/ventral striatum area (VC/VS) and the anteromedial subthalamic nucleus (amSTN). Patients were randomly assigned to receive stimulation in one of these regions and following a 12-weeks observation period, switched to receive stimulation in the other region. The researchers evaluated the effects of stimulation in each brain region on OCD symptoms as well as on other cognitive functions. They found that stimulation at both brain sites reduced OCD symptoms to a similar extent. However, this effect seemed to be mediated by different mechanisms in each site: stimulation of the amSTN improved cognitive flexibility, while stimulation of the VC/VS region greatly improved patients’ mood.

Biological mechanisms underlying the beneficial effects of Exenatide in Parkinson's

The UCL research group led by Prof Tom Foltynie recently completed a phase 2 clinical trial indicating that Exenatide, a drug routinely used to treat diabetes, has beneficial effects on motor function and disease progression in Parkinson’s disease. In the current study, the research team used clinical outcomes and biological samples collected from participants in the Exenatide clinical trial to try and understand the biological mechanism underlying the drug’s effect in Parkinson’s. They found that Exenatide was able to effectively activate the brain insulin pathway and increase the level of several proteins which contribute to neuronal cell survival and to the reduction of cellular pathological processes. Furthermore, the improvement in trial participants’ motor symptoms was associated with the activation of this cellular-molecular pathway. The results of this study indicate that Exenatide indeed affects the brain’s insulin pathway and these effects are a likely explanation for its clinical effects, as observed in the trial. A phase 3 clinical trial to validate and extend the beneficial effects of Exenatide in Parkinson’s disease is expected to commence later this year.

Parkinson disease is known to have a very large clinical heterogeneity, meaning that different patients could experience very different symptoms, disease course and response to treatment. There have been many attempts to define clinical “sub-types” in Parkinson’s but these classification methods tended to lack long-term follow-up or association to neuropathology that could suggest a pathophysiological mechanism underlying the clinical heterogeneity. The current study, led by Prof Tom Warner and colleagues at UCL and the Queen Square Brain Bank, used records of patients with detailed long-term clinical follow-up and neuropathologic findings to evaluate the validity of newly proposed Parkinson’s clinical subtypes and suggest possible relevant pathophysiologic mechanisms. By using clinical records that include detailed information regarding nonmotor symptoms on a large group of pathology-confirmedPDcases at the Queen Square Brain Bank (QSBB), we now provide longitudinal data throughout the disease course and neuropathologic correlation for the newly proposed clinical subtypes and suggest possible pathophysiologic mechanisms responsible for clinical and neuropathologic heterogeneity. The researchers confirmed that clinical subtyping of PD based on motor symptoms, RBD, and autonomic and cognitive dysfunction can indeed provide accurate long-term estimation of disease progression and survival. Different severity and progression of neuropathologies are important determinants of Parkinson subtypes, and age at diagnosis should be included in future subtype classifications systems.

Impulsive compulsive behaviours (ICBs) such as pathological gambling, compulsive sexual behaviour, compulsive shopping and binge eating are a known complication of dopaminergic treatment for Parkinson’s disease (PD) which affects at least 1 in 7 patients. While ICBs are a well-recognized problem, there is little information its long term course, management and consequences. In the current publication, MDC researchers led by Prof Tom Warner present long-term longitudinal data on 46 patients with Parkinson’s and ICBs, with an average follow-up period of 8 years. The researchers used clinical interviews and assessment with questionnaires and scales to gain a detailed and in-depth clinical picture of study participants. They found that while 40% of study participants no longer exhibited ICBs at the long-term follow up, more than 50% had a reduction in symptoms but still experienced ICBs to some extent. This is in contrary to previous, shorter-term studies, which indicated full resolution of ICBs following reduction of dopaminergic medication.