UCL Medical elective students represented Queen Square for the first time in in an international contest of drama and neurology, titled ‘The Move', hosted by Pitié-Salpêtrière. They came joint-third with Rennes, behind Paris & Dublin, and were also awarded ‘Special Jury Prize’ 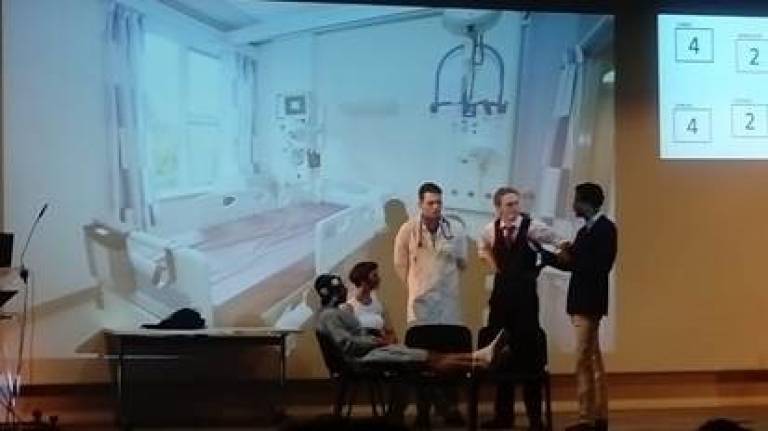 On the morning of Wednesday 3rd July 2019, a team of seven fourth-year medical students from University College London congregated in the spacious lobby of St Pancras Station in preparation to board the Eurostar to Paris. As shafts of sunlight bathed the bustling communal area — unsteady heaps of luggage piled here and there, soon-to-be travellers snatching their last fortifying snack, general announcements breaking on the tannoy system overhead, and all the concomitant hustle-and-bustle of a sprawling railway terminus — I reflected on the mission with which our select company had been tasked: namely, to represent Queen Square for the first time in its illustrious history in a fascinating international contest of drama and neurology, cryptically titled ‘The Move’. Over the preceding few months, meeting in the evenings and at week-ends, our team had donned our long-cast-aside creative caps and collectively racked our brains for amusing scenarios to perform at this competition, to be hosted in none other than the world-famous Pitié-Salpêtrière.

"Seven teams from medical schools around Europe were to each act out eight separate neurological syndromes. This event was a culmination of a novel interactive way of overcoming a disturbing phenomenon reported amongst many medical students, the so-called ‘neurophobia’ (roughly translatable as ‘a fear of learning neurology’) via interactive acting-based teaching sessions. Devised in Paris by Prof Flamand-Roze some years ago, this pedagogical revolution had gathered wind and spread throughout European medical schools — including across the Channel — reaching an enthusiastic following in the hallowed crypts of Queen Square’s lecture theatres, our team being recruits bred from this contingent."

On our arrival at Gare du Nord, and having delivered our luggage to our lodgings, we made the fifteen-minute journey to the venue, where there was something of a lunch party already in full swing. Slipping into a dinner jacket and other costumes for our opening James Bond scene, we took our pews near the back of the lecture theatre and awaited our turn. Fittingly, after speeches, it was the Paris team to kick off proceedings, which they did in some style: spectacular opening graphics and a light-hearted silent sketch about a stroke-struck Charlie Chaplin. Not too long after, we were summoned on stage, where — to rousing 007 theme music, an indefatigably attired henchman and heavily-accented interpreter, replete with stunning Bond girls, bushy-haired Q and cackling, cat-stroking villain — our great campaign was under way, staging an uncharacteristically unintelligible 007 afflicted with a debilitating Wernicke’s aphasia courtesy of Q’s latest wizardry. Standing on stage, whether for presentation or performance, is always a privilege, but to occupy the arena for the latter purpose especially gets the dramatic juices flowing — and it certainly did so for me on this occasion.

The next scenario for us was Centre Court, set in a 1990s Wimbledon, touching down in the legendary era of Agassi and Sampras. The pathology here was a distractible ball-girl suffering a sudden and incapacitating attack of benign paroxysmal positional vertigo, promptly managing to receive the care of a highly-efficient and glamorous (both in spite of the cumbersome white coat) court-side neurologist.

Over the rest of the afternoon and the whole of the next day, peppering the agenda in between a medley of entertaining acts by rival medical schools, our team introduced the audience to a variety of settings in time and place, each for a different neurological syndrome: an exclusive Himalayan monastery in which a peripheral-neuropathy-suffering monk found unexpected stardom; to a telemetry ward employing experimental approaches for inducing seizures; to an Egyptian excavation site unearthing an ancient and rather decrepit pair of mummies, one of which aptly suffered from a ‘pyramidal syndrome’; to the wonderful ritualisation of our very own Gowers’ round (a weekly teaching round held at Queen Square in honour of the eponymous neurologist) chaired by a formidable professor before whom quaked a subservient registrar examining a patient with cerebellar pathology; and, perhaps anti-climatically, to a park bench in 19th-century London. This last, our closing act, a poignant scene of a Parkinsonian man conversing in slowed and hypophonic speech with Dr Parkinson himself, provided a palpable contrast to our more comical scenarios beforehand, a moving reminder that behind each pathology — be it chorea or stroke — lie the painfully tragic realities of myriad patients and their loved ones. 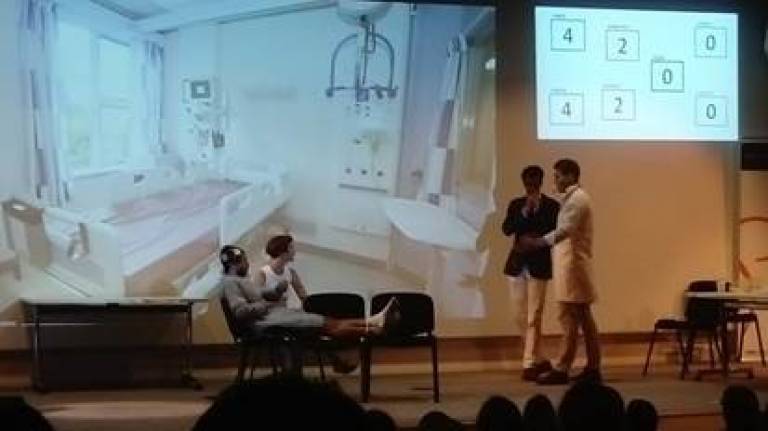 Not long after the last performance, the final results were announced: we had come joint-third with Rennes, behind the worthy Paris (first) and Dublin (second). The Queen Square team was also graced with a further award, the ‘Special Jury Prize’, which, as I understand, was for the originality of our scenarios. Delighted with the success of our efforts, we headed to a not-too-distant bar to celebrate the joyous occasion and mingle with new-found peers.

"Thus ended the fantastical two days, a rich tapestry of intricately-woven interpretations of neurological semiology incorporating settings from a multitude of cultures and eras: all in all, a memory truly to be cherished. By unleashing creativity in the context of the serious neurology underpinning the playful spectacle, The Move Final and the preparation leading up to it formed not only a fun-filled contest but an en masse learning opportunity on a grand scale."

I would like to take this opportunity to thank Dr Eavan McGovern for her teaching, words of encouragement and unquenchable optimism; David Blundred for organising all the logistics of travel and accommodation so smoothly, and Diane Demailly and Milo Delaney for giving up their time to provide invaluable coaching along the way. Finally, it was a real pleasure to work alongside my fellow team-mates: Barnaby Glover, Zara Kidwai, Camila Nagoda, Zabina Satar, Adam Shibu and Jonny Yeats.