This is a student led conference organised in partnership between London and Paris, initiated to bring together young neuroscientists from the Institute of the Brain & Spinal Cord (Institut du Cerveau et de la Moelle Epiniere – ICM, Paris) and the IoN

The Conference aims to promote the creation of new research collaborations & the strengthening of existing links. In March 2018 a delegation of 50 early career researchers from ICM visited Queen Square for the first meeting of minds, which was a great success.

The return visit to Paris this year saw more than 100 participants (PhD, Post-Docs and PIs) presenting the wide range of the research done in both institutes through 3 days of talks, posters and workshops. This year also included an extra-scientific panel session, proposed by Dr. Marie-Claude Potier (ICM) and Dr. Steve Fleming (IoN) on the theme of ‘Growing up in Science: Gender in Science’. Several new collaborations between and within the institutes have been prompted by the meeting, which will hopefully be very fruitful.

The organising team would like to thank all the early career researchers from IoN and ICL who presented their work at the conference. 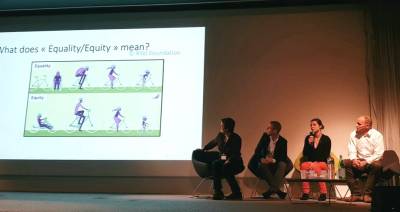 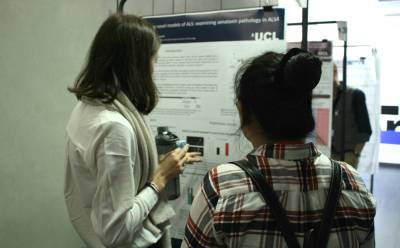 Poster session at the ICM/ION Conference 2018

Participants experience was overall very positive with most (93.5%) looking forward to participate in similar meetings in the future with 97% of participants having a positive overall experience of the meeting. Most participants (75-95%) estimated that the sessions of talks and poster were appropriate in organisation, timing and content. The extra-scientific conversation was considered as interesting by most respondents, and prompted a good conversation during and after the session itself (32 respondents). The workshops were rated highly on their educational value with all respondents reporting having learned something from it, 82.2% of respondents indicated they will consider or definitely reuse the methods presented in the workshops, in collaboration with the ICM researchers who organised them.

“I really appreciated the opportunity to create new collaborations between the ICM and the IoN as there are several groups who have parallel projects at IoN.”

“Excellent organisation and it was a superb learning experience, thank you!”

“It was an amazing experience, one of the best of my time at IoN and I'm so glad I went for it!”

“I had a really great time, and learned alot about work going on at ICM, but also from other ION students"

“This session was very useful. Much more valuable than originally expected.”

“I loved this session! It was great to hear scientists talking about the things which matter most, but which are never spoken about."

“I really enjoyed the open based discussion, I would definitely attend a similar session again"

“It was very valuable because researchers shared their personal experience/anecdotes.”