Three UCL academics have been made Fellows of the British Academy for the humanities and social sciences, in recognition of their outstanding research. 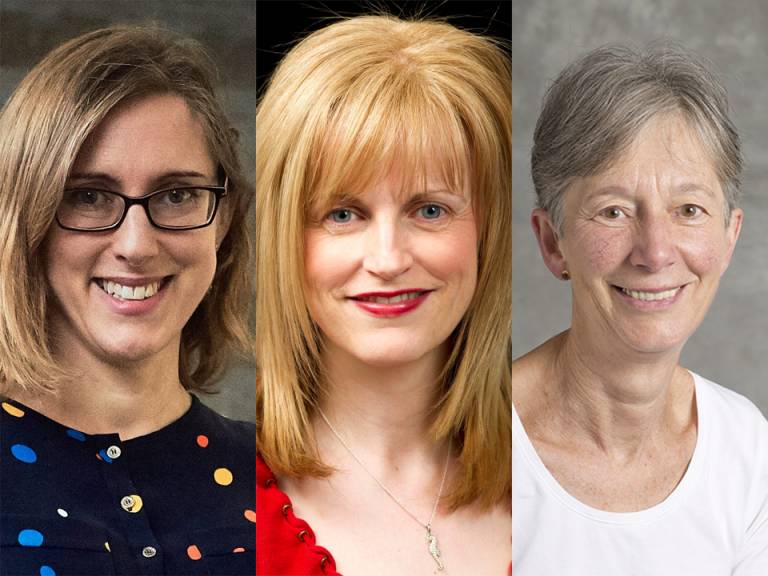 Professors Sarah-Jayne Blakemore, Eleanor Maguire and Catherine Hall are among 76 distinguished scholars to be elected to the fellowship this year.

The British Academy, the UK’s national academy for the humanities and social sciences, is a community of over 1,400 of the leading minds.

Professor Sarah-Jayne Blakemore, Deputy Director of the UCL Institute of Cognitive Neuroscience, is known for her research into the teenage brain. She researches the development of social cognition and decision-making in the human adolescent brain. She is actively involved in public engagement, seeking to foster understanding of neuroscience and support of mental health in adolescence. She won the Royal Society Rosalind Franklin Award in 2013 and the Klaus J. Jacobs Research Prize in 2015.

Professor Eleanor Maguire (UCL Institute of Neurology) researches cognitive neuropsychology and neuroimaging of memory, studying how the brain supports our ability to navigate in the world, remember the experiences we have along the way, and imagine the future. Her research attracted international attention when she found that the brains of London taxi drivers had an enlarged hippocampus from learning the complex layout of London streets. She is also a Fellow of both the Academy of Medical Sciences and the Royal Society (FRS), and an Honorary Member of the Royal Irish Academy.

Professor Emerita Catherine Hall (UCL History) specialises in re-thinking the relationship between Britain and its empire. The studies the history of the British Empire in the 18th and 19th centuries, with particular reference to the Caribbean, including the entangled raced and gendered histories born of colonialism and post-colonialism. She is Chair of UCL’s Centre for the Study of the Legacies of British Slave-ownership, which explores the role of slavery in the formation of modern Britain, and hosts an extensive database of British slave-owners and their estates. She is also a Fellow of the Royal Historical Society.

Professor Sir David Cannadine, President of the British Academy, said: “I am delighted to welcome this year’s exceptionally talented new Fellows to the Academy. Including historians and economists, neuroscientists and legal theorists, they bring a vast range of expertise, insights and experience to our most distinguished fellowship. The election of the largest cohort of Fellows in our history means the British Academy is better placed than ever to help tackle the challenges we all face today.”

“I extend to all of our new Fellows my heartiest congratulations and I look forward to working closely with them to build on the Academy’s reputation and achievements.”