A research team led by UCL Institute of Neurology has identified the pattern of brain tissue loss in multiple sclerosis, enabling improved prediction of disability progression. 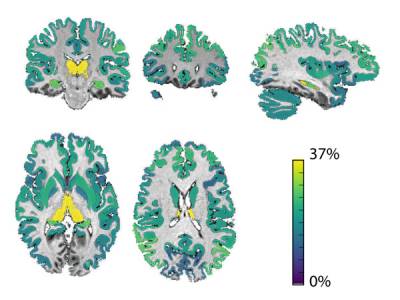 A research team led by UCL Institute of Neurology has identified the pattern of brain tissue loss in multiple sclerosis, enabling improved prediction of disability progression.

The study, published in Annals of Neurology, was one of the largest brain imaging studies ever conducted investigating multiple sclerosis (MS).

“It’s well known that brain atrophy occurs in people with MS and varies by region, but we typically only measure the shrinkage of the whole brain. By looking at brain tissue loss in a more detailed fashion in different MS subtypes, we found it’s possible to predict disability progression in advance. This has many implications in clinical trials that use brain atrophy to investigate the effect of neuroprotective drugs,” said the study’s lead author, Dr Arman Eshaghi (UCL Institute of Neurology).

The researchers collected data retrospectively from seven research centres in the UK, Italy, Spain, Austria and the Netherlands involved in the MAGNIMS consortium, pulling together MRI scans and disability measures from 1,417 study participants (1,214 with MS), with an average follow-up of 2.41 years.

The research team found that loss of volume of the deep grey matter (which is deep in the brain, or the subcortex) was faster than loss of other brain regions. They also found a correlation between deep grey matter volume loss and disability accumulation. The strongest relationship was found in the thalamus, the largest component of deep grey matter, which is involved in relaying sensory and motor signals.

The study identified multiple spatial patterns of grey matter atrophy, including some that are dependent on type of MS, which is a highly heterogeneous disease. They found evidence suggesting that regions that lie more deeply in the brain and have many connections may be more vulnerable to atrophy than other regions.

This study shows the pattern of ongoing brain shrinkage in different MS subtypes for the first time with far reaching implications for development of future treatments in MS.

“Our methods could be used right away for Phase II clinical trials, offering up a higher sensitivity than existing measures to investigate whether a new drug could work,” said Dr Arman Eshaghi (UCL Institute of Neurology).

The researchers caution that the method does not help predict disability progression in individual patients; rather, it’s useful at the population level, providing a valuable measure for use in clinical trials of putative treatments that protect nerve cells.

“We have demonstrated that deep grey matter atrophy is linked to disability progression in multiple sclerosis by using advanced imaging analysis techniques and collecting a large number of MRI scans, because of the effort of many European researchers,” said Professor Olga Ciccarelli (UCL Institute of Neurology), the senior author of the study.